n the settlement approved by the court, the school district agreed its employees would "not do any of the following in the presence of students, either during the school day or at School District-sponsored activities or events: (a) initiate, solicit or direct prayers, (b) join students in prayers (e.g., joining in a student prayer circle), (c) proselytize, or (d) invite a third-party to engage in any of the practices listed in (a)(c)" and would not display religious images, Bibles or religious texts, "unless such is for pedagogical and non-religious purposes (such as a history of world religions course)."  And at graduation, the school district "will not include a prayer whether referred to as a prayer, blessing, invocation, benediction, or otherwise as part of the official program of any graduation ceremony" and the "portions of the program devoted to student speeches will each be given the same name, such as Student Remarks or a substantially similar, but non-religious term. For instance, "Student Remarks by [valedictorian]". 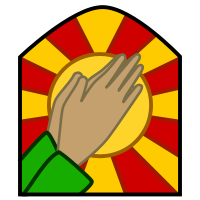 District Judge Biery had entered a preliminary injunction in June 2011, including a provision that the school district "shall remove the terms “invocation” and “benediction” from the program of ceremonies for the graduation exercises. These terms shall be replaced with “opening remarks” and “closing remarks.”"   This was quickly reversed by the Fifth Circuit in a per curiam opinion on an emergency motion, in part for mootness - - - the school district having abandoned the use of "invocation."

What makes this settlement and its approval other than run-of-the-mill is District Judge Biery's opinion approving the settlement, with its appendix II, entitled "An Ironic Venue for Separation of Church and State Litigation," including a catalog of quotes.

If it reads more like a position paper than a judicial opinion, that may be because it seemingly responds to another position paper.  One by Presidential Candidate New Gingrich.  As we've previously discussed, Gingrich's views on the federal judiciary are less than positive, including his "white paper" on judicial activism.  The paper states:

A good place to start correcting federal judges is in Texas. This past June, a federal district court judge in West Texas issued an extraordinary judicial order that threatened local school officials with going to jail if they failed to censor the content of a student’s speech at a high school graduation ceremony. Such oppressive and tyrannical behavior from a sitting federal judge is not constitutional and has no place in America. Congress would be well within its power to impeach and remove this federal judge from office, or failing that, work with the President to abolish his judgeship.

Appendix B of the white paper discusses Schultz v. Medina Valley Independent School District and Judge Biery by name, concluding that the "American people would be better off without a judge whose anti-religious extremism leads him to ban a high school valedictorian from saying even the word “prayer.”"

Judge Biery's response - - - although he never mentions Gingrich by name - - - matches Gingrich's style of rhetoric, complete with quotations and historical incidents. The order also includes some "personal thanks" that provide a flavor of the controversy and allude to Gingrich.

To the United States Marshal Service and local police who have provided heightened security: Thank you.

To those Christians who have venomously and vomitously cursed the Court family and threatened bodily harm and assassination: In His name, I forgive you.

To those who have prayed for my death: Your prayers will someday be answered, as inevitably trumps probability.

To those in executive and legislative branches of government who have demagogued this case for their own political goals: You should be ashamed of yourselves.

To the lawyers who have advocated professionally and respectfully for their clients respective positions: Bless you."

Listed below are links to weblogs that reference Controversial School Prayer Case in West Texas Comes to (Controversial) End :

The 1st. Amendment, second clause, requires the free exercise of religion in both private and public sectors, period. There is no ambiguity, social interpretation, etc.

I agree with Craig. there is no lack in clarity and room in interpretation