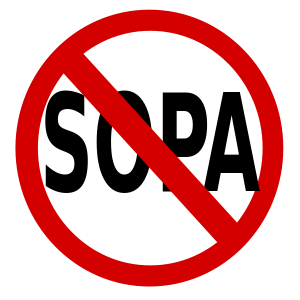 SOPA, the Stop Online Privacy Act, H.R.3261, and its Senate counterpart, Protect-IP Act, S. 968, seek to protect copyright on the internet.  It has provoked a day of protest today, including "blackouts" by Wikipedia, Reddit, and other sites, contending that the bills violate the First Amendment.

SOPA has a savings clause in §2(a)(1) that provides

"FIRST AMENDMENT- Nothing in this Act shall be construed to impose a prior restraint on free speech or the press protected under the 1st Amendment to the Constitution."

However, as Laurence Tribe's 20+ page memo on the unconstitutionality of SOPA concludes:

To their credit, SOPA’s sponsors recognize the importance of the constitutional issues raised by the statute they propose. The bill includes language stating “[n]othing in this Act shall be construed to impose a prior restraint on free speech or the press protected under the 1stAmendment to the Constitution.” But proclaiming the bill to be constitutional does not make it so – any more than reminding everyone of a proposed law’s good intentions renders that law immune to First Amendment scrutiny. At the same time, the proviso may have the unintended effect of rendering large swaths of the bill inoperative. For it is difficult to understand how the provisions discussed above would operate except  as impermissible prior restraints. The proviso creates confusion and underscores the need to go back to the drawing board and craft a new measure that works as a scalpel rather than a sledgehammer to address the governmental interests that SOPA purports to advance.

A good collection of the arguments against SOPA is over at Center for Democracy and Technology, including "long-form analysis" by both The Heritage Foundation and the ACLU.

As the LATimes reports today, SOPA and Protect-IP are losing Congressional support, including from former co-sponsors. It may be that the legislation may be reworked to be more scalpel-like.

Imaging life without free knowledge if this bill has been implemented.