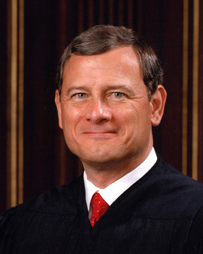 Chief Justice Roberts, who during his confirmation hearings notoriously likened the role of judges to that of umpires in sporting contests, has returned to a discussion of sports to open his annual year end report on the federal judiciary for 2011.   The report begins with a reference to the events of 1920, when "American baseball fans were jolted by allegations that Chicago White Sox players had participated in a scheme to fix the outcome of the 1919 World Series."

Thankfully, Roberts soon makes this almost century old baseball scandal relevant to his topic: the ethics and integrity of judges, or more specifically, of the Justices of the United States Supreme Court.

The team owners responded to the infamous “Black Sox Scandal” by selecting a federal district judge, Kenesaw Mountain Landis, to serve as Commissioner of Baseball and restore confidence in the sport. The public welcomed the selection of a prominent federal judge to purge corruption from baseball. But Judge Landis’s appointment led to another controversy: Could a federal judge remain on the bench while serving as Baseball Commissioner? That controversy brought to the fore a still broader question: Where do federal judges look for guidance in resolving ethics issues?

In discussing the ethical concerns that vigorously swirled around Justice Thomas and other Justices regarding their attendance at events, including political fundraisers, it has oft been noted that the Justices of the Supreme Court, unlike other federal judges, are not covered by the Code of Conduct.   And as Roberts states, "some observers"  have "recently questioned whether the Judicial Conference’s Code of Conduct for United States Judges should apply to the Supreme Court."  For example, there has been a specific suggestion by at least one member of Congress that it should amend the Code to include Justices.

In his report, Roberts, again referring to "some observers," rejects the suggestion that "because the Judicial Conference’s Code of Conduct applies only to the lower federal courts, the Supreme Court is exempt from the ethical principles that lower courts observe."  For Roberts, such observations rest on "misconceptions about both the Supreme Court and the Code," and he avers that Justices do consult the Code.

First, Roberts considers financial and gift regulations, noting that the Justices are covered by Congressional acts in that regard and more interestingly stating that the Justices comply although the "Court has never addressed whether Congress may impose those requirements on the Supreme Court."  Roberts discussion is a little more than a page and provides little insight into the controversy swirling around the nonreporting of 1.6 million dollars of spousal income or financial interests in a museum.

Second, Roberts tackles the question of recusal.  Again, he does not mention specific Justices, but one assumes it is again Justice Thomas, as well as Justice Kagan who was Solicitor General.  Kagan has not recused herself with regard to the constitutionality of the Affordable Care Act, although she has regarding many other matters including the controversial Arizona immigration statute, SB1070.  Roberts writes:

Although a Justice’s process for considering recusal is similar to that of the lower court judges, the Justice must consider an important factor that is not present in the lower courts. Lower court judges can freely substitute for one another. If an appeals court or district court judge withdraws from a case, there is another federal judge who can serve in that recused judge’s place. But the Supreme Court consists of nine Members who always sit together, and if a Justice withdraws from a case, the Court must sit without its full membership. A Justice accordingly cannot withdraw from a case as a matter of convenience or simply to avoid controversy. Rather, each Justice has an obligation to the Court to be sure of the need to recuse before deciding to withdraw from a case.

As with other ethical questions, Justices and lower federal court judges contemplating recusal can take good counsel from the principles set forth in Canon 14 of the original 1924 Canons of Judicial Ethics. That Canon addresses judicial independence. It provides that a judge “should not be swayed by partisan demands, public clamor or considerations of personal popularity or notoriety, nor be apprehensive of unjust criticism.” Such concerns have no role to play in deciding a question of recusal.

I have complete confidence in the capability of my colleagues to determine when recusal is warranted. They are jurists of exceptional integrity and experience whose character and fitness have been examined through a rigorous appointment and confirmation process. I know that they each give careful consideration to any recusal questions that arise in the course of their judicial duties. We are all deeply committed to the common interest in preserving the Court’s vital role as an impartial tribunal governed by the rule of law.

Roberts closes with a return to baseball, followed by a quotation from Alexander Hamilton in The Federalist No. 78, and then best wishes for the new year.

But best wishes, sports, and even The Federalist aside, it is unlikely that Roberts' year end message has convinced anyone that the ethical controversies will not continue in 2012.

Listed below are links to weblogs that reference CJ Roberts' Year End Report on the Federal Judiciary: