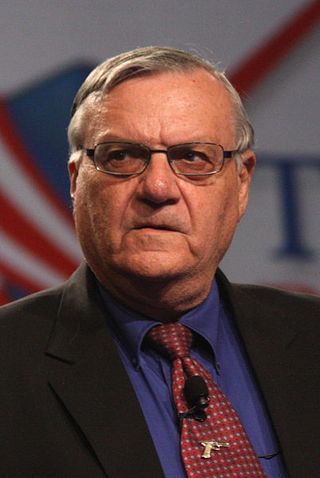 Joe Arpaio, who styled himself as "America's toughest sheriff" in his 1997 book and the 2008 sequel is facing some tough constitutional times.  As elected sheriff of Maricopa County, Arizona, Arpaio has long been controversial for his immigration and prison "get tough" stances.

The death yesterday of a Latino veteran who had been tased while in custody of the Maricopa County jails - - - informally called Arpaio's jails - - - might well result in a lawsuit.

A complaint filed yesterday on behalf of a woman who was shackled while she giving birth also addresses problems at the jails.  In Mendiola-Martinez v. Arpaio, the plaintiff, a non-citizen, alleges she was imprisoned without bail for forgery when she was six months pregnant.  During her labor, she was transferred to the medical center, gave birth by Cesarean section, was shackled before and after the surgery, was discharged while bleeding, shackled hands and feet, and walking through the hospital only in her hospital gown, and was taken back to jail.  The complaint claims violations of the Eighth Amendment and Fourteenth Amendment regarding deliberate indifference to medical needs, cruel and unusual punishment, and a denial of Equal Protection under the Fifth, Fourteenth, and Fifteenth Amendments.  The last claim alleges liability under Monell v. New York City Dept. of Social Svcs., 436 U.S. 658 (1978), including a failure to train, supervise, and discipline employees. All these claims are buoyed by disapproval of the shackling of women in labor.  As a press release from Mendiola-Martinez's attorneys summarizes the law:

The immunity of Joe Arpaio will surely be raised by his attorneys.  The extent to which Arpaio is immune was also a question before the en banc Ninth Circuit last week in the unrelated case of Lacey v. Arpaio, in which reporters for the Phoenix New Times claim a violation of their First Amendment rights based in part on their midnight arrests.  The en banc hearing vacated the previous Ninth Circuit panel opinion, causing some consternation and confusion in the oral argument, available for viewing here.  Here's a synposis of the problem, via the Phoenix New Times, and verifiable by the video:

24:50 -- Sheriff Arpaio's lawyer Eileen GilBride gets her turn. At about 27 minutes, she begins to be hit with questions and hypothetical situations about the possibility of a conspiracy by the county officials. This stays interesting for several minutes.

38:30 -- GilBride's blunder: She doesn't realize that New Times has alleged a conspiracy because she apparently isn't familiar enough with the case. And she forgot the document that contains the part about the conspiracy allegation.

"You come to court without briefs?" Kozinski chides, waving some papers in the air.

GilBride plunges ahead on her bad recollection until called on it by Kozinski, who informs her that the conspiracy allegation is in the suit's opening brief.

40:15 -- The dress-down: "Coming to court without the briefs is poor lawyering in itself, but not knowing what's in the briefs is even worse," Kozinski says.

This could be a useful bit for ConLawProfs mentoring or judging moot court teams.

In addition to litigation woes, Sheriff Arpaio and the Maricopa County Sheriff's Office (MCSO) is again the subject of negative Department of Justice findings.  The December 15 letter concludes that the office has violated the First, Fourth, and Fourteenth Amendments to the United States Constitution, and has 60 days to take "clear steps" toward reaching an agreement with the Department of Civil Rights to remedy these violations, or there will be a civil suit seeking remedies.  This letter states it is unrelated to a previous investigation that it specifically references: an investigation concluding that unconstitutional conditions existed at the jails with respect to (1) the use of excessive force against inmates and (2) deliberate indifference to inmates' serious medical needs. An agreement between the United States and MCSO was reached in October 1997.  In this letter, police practices aimed at perceived immigrants are highlighted, with the letter concluding the practices " "are unconstitutional and are harming innocent Latinos."

Sheriff Arpaio's own actions have helped nurture MCSO's culture of bias. For example, Sheriff Arpaio has frequently distributed racially charged constituent letters, annotating the letters with handwritten notes that appear to endorse the content of the letter, circulating the letters to others on the command staff, and/or saving the letters in his personal file. Many of these letters contain no meaningful descriptions of criminal activity-just crude, ethnically derogatory language about Latinos.

There is speculation that Arpaio will not run for relection as sheriff, as well as speculation he will run for the United States Senate.

Listed below are links to weblogs that reference The Constitutional Issues Facing Sheriff Joe Arpaio:

Anyone who's been paying any attention probably knows that Joe has little to no regard for the Constitution, or at least to the idea that it applies to brown people, as well.