Ron Paul and The Federal Reserve

With Ron Paul reportedly becoming a "serious contender" in the presidential primary, there is renewed attention to his views on the Federal Reserve as "dishonest, immoral, and unconstitutional," encapsulated in his campaign slogan, "end the fed. " 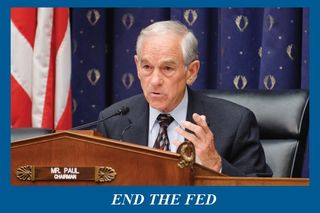 An extended video, Fiat Empire, now about 6 years old, is a good introduction to the issues.

The argument supporting the unconstitutionality of the Federal Reserve can be summed up in the phrase "the poster child of unconstitutional private delegation," cited to John Hart Ely in Timothy Canova's article, Black Swans and Black Elephants in Plain Sight: An Empirical Review of Central Bank Independence, available on ssrn.  Section 4 of the article is a great overview and argument regarding the Federal Reserve.  (I assigned this section last semester in Constitutional Structures in conjunction with Free Enterprise Fund v. PCOAB which Canova also discusses, and showed a short clip from Fiat Empire; it was well-receoved by students.)

As Canova notes, concerns about the Federal Reserve arise both from the "populist libertarian right" and the "populist progressive left" :  When "Representative Ron Paul, a Republican libertarian from Texas, introduced a bill to subject the Federal Reserve to an audit by the Government Accountability Office (GAO)" it was "cosponsored on the left by such Democratic and progressive Congressmen as Dennis Kucinich from Ohio and Alan Grayson from Florida."

Canova and others, including Joseph Stiglitz, Jeffrey Sachs, and Robert Reich have been named experts on a panel advising a United States Senator to "develop legislation to restructure the Fed and tighten rules on conflicts of interest, ensure that the Fed fulfills its full-employment mandate, increase transparency, protect consumers and reduce income inequality."  That Senator is Bernie Sanders, Independent-Vt.   And while Paul and Sanders may agree on some aspects of the Federal Reserve, they seem to be very far apart on health care reform.

Listed below are links to weblogs that reference Ron Paul and The Federal Reserve: