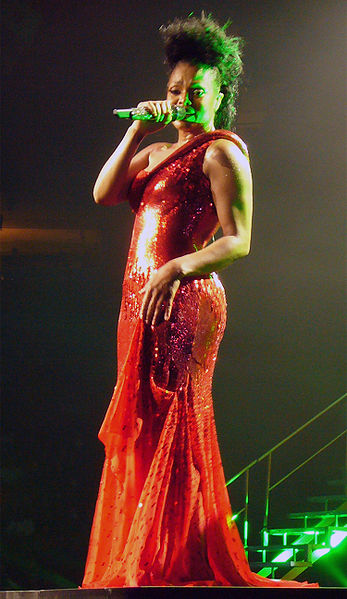 "This case involves a February 1, 2004 incident: the exposure, for nine-sixteenths of one second, of Janet Jackson‘s bare right breast during the live halftime performance of the National Football League‘s Super Bowl XXXVIII."   The  "wardrobe malfunction" of superstar Janet Jackson (pictured right) was the subject of a fine by the FCC.

While the holding of today's Third Circuit opinion in CBS v. FCC is a matter of administrative law rather than constitutional law, the First Amendment provides the background of the FCC's ability to regulate broadcast obscenity.  The case is also part of the extended litigation surrounding fleeting indecency and fleeting expletives that have occupied the courts on administrative and First Amendment issues for the past thirty years and are again before the Supreme Court in FCC v. Fox Television Stations (II) involving Cher's use of an expletive.

Today's Third Circuit opinion was remanded in light of the Court's ruling in the previous iteration of the Cher case, FCC v. Fox Television Stations, Inc., 129 S. Ct. 1800 (2009). But the Third Circuit did not change its conclusion.  As the majority opinion stated:

This case, like Fox, involves a tightening of the Federal Communications Commission‘s standards for the broadcast of fleeting indecent material. Fox concerned the FCC‘s decision to abandon its safe harbor for expletives that are not repeated; this case considers the FCC‘s departure from its earlier policy exempting fleeting images from the scope of actionable indecency. While we can understand the Supreme Court‘s desire that we re-examine our holdings in light of its opinion in Fox — since both involve the FCC‘s policy regarding ―fleeting material — in Part A of this opinion we conclude that, if anything, Fox confirms our previous ruling in this case and that we should readopt our earlier analysis and holding that the Commission acted arbitrarily in this case.

The majority restated its conclusion that the FCC action was arbitrary and capricious:

Considering all of these facts, we do not see any basis to conclude that Fox alters our previous analysis of the fleeting-material exception. At bottom, the Commission attempts to convert a passing reference in Fox‘s background section into a holding that undermines what the opinion otherwise makes clear: an agency may not apply a policy to penalize conduct that occurred before the policy was announced. The Commission‘s argument also rewrites history, marginalizing the Supreme Court‘s recognition in Fox that Golden Globes reflected a clear change in FCC‘s fleeting-material policy, and ignoring the agency‘s consistent practice — over three decades before its order in this case — of exempting all fleeting material, whether words or images, from enforcement under its indecency policy

With the First Amendment issue presently before the Court, perhaps the case could be subject to yet another petition for certiorari and remand?

Listed below are links to weblogs that reference Third Circuit Reaffirms Its Fleeting Indecency Opinion on Remand:

As long as we have blips and pixilations seams to me that the problems of fleeting indecency is mostly covered.