Proposition 8 and the Question of Constitutional Standing: In the California Supreme Court

The question - - - certified by the Ninth Circuit to the California Supreme Court and heard in September - - - was this:

The short answer from the California Supreme Court today is "Yes."  Or, as the conclusion to the court's opinion in Perry v. Brown states: 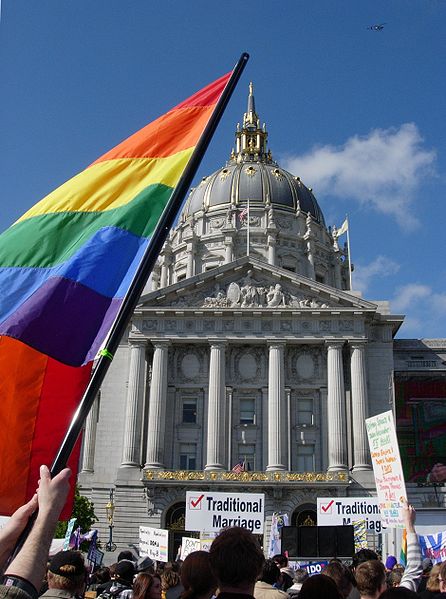 It takes the court some 60 pages to reach this conclusion in an unanimous opinion written by the new Chief Justice Cantil-Sakauye, with an additional 7 page concurring opinion by Justice Kennard. Kennard wrote to "highlight the historical and legal events that have led to today‘s decision and to explain why I concur in that decision," and reiterated her position that is it is the judicial role to decide whether "excluding individuals from marriage because of sexual orientation can be reconciled with our state Constitution‘s equal protection guarantee."   On the contrary, the main opinion de-emphasized Proposition 8: "the state law issue that has been submitted to this court is totally unrelated to the substantive question of the constitutional validity of Proposition 8. Instead, the question before us involves a fundamental procedural issue that may arise with respect to any initiative measure, without regard to its subject matter."

The California Supreme Court states that "past official proponents of initiative measures in California have uniformly been permitted to participate as parties — either as interveners or as real parties in interest — in numerous lawsuits in California courts challenging the validity of the initiative measure the proponents sponsored," and without any specific showings.  The opinion, it seems, could have ended there but the California Supreme Court stated it felt it was "useful and appropriate briefly to set forth, at the outset, our understanding of the federal decisions that discuss the role that state law plays in determining whether, under federal law, an individual or entity possesses standing to participate as a party in a federal proceeding."  Although the opinion emphasized that its "discussion of federal decisions is not intended to, and does not purport to, decide any issue of federal law, and we fully recognize that the effect that this opinion‘s clarification of the authority official proponents possess under California law may have on the question of standing under federal law is a matter that ultimately will be decided by the federal courts," certainly its analysis will be carefully considered by the Ninth Circuit.

The court's major analytic attention, however, was devoted to matters of state constitutional law focused on the initiative process.  In these cases, non-state actors have had the ability to defend the initiative from challenges.  Additionally, the court noted that "even outside the initiative context it is neither unprecedented nor particularly unusual under California law for persons other than public officials to be permitted to participate as formal parties in a court action to assert the public‘s or the state's interest in upholding or enforcing a duly enacted law."

If the Ninth Circuit fully credits the California Supreme Court's opinion and finds it sufficient to confer Article III standing, the court will proceed to the merits and review Judge Walker's opinion in Perry v. Brown (f/k/a Perry Schwarzenegger) that Proposition 8 violates the Constitution.

RR
[image: Pro and anti-Proposition 8 protesters rally in front of the San Francisco City Hall via].

Listed below are links to weblogs that reference Proposition 8 and the Question of Constitutional Standing: In the California Supreme Court: