It's the 176th anniversary of the birth of Mark Twain, an anniversary that while not a usual celebratory number (100, 150, or even 175) has been attracting some attention.

Mark Twain has also received a bit of attention from the United States Supreme Court in constitutional law cases. 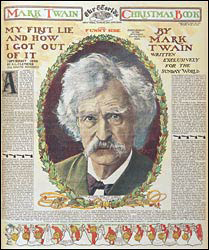 Perhaps most obviously the pseudonymous Mark Twain appears in the context of the First Amendment right to be anonymous.  In McIntyre v. Ohio Elections Committee (1995), the Court held unconstitutional a state statute prohibited the distribution of campaign literature that does not contain the name and address of the person or campaign official issuing the literature.  Ms. McIntyre had distributed leaflets from “CONCERNED PARENTS AND TAX PAYERS” opposing a proposed school tax levy and was fined.  The Court's opinion by Justice Stevens noted that "Great works of literature have frequently been produced by authors writing under assumed names."  The supporting footnote first lists "Mark Twain (Samuel Langhorne Clemens)" as an American who first comes to mind, followed by O. Henry (William Sydney Porter), and expanded with reference to writers such as Voltaire, and even making a brief foray into the status of Shakespeare, a controversy now appearing in theatres.

Other references to Twain support Twain's reputation as an eminently quotable writer.  William Douglas, dissenting in a First Amendment case regarding the notorious Smith Act, deploys a Twain quote as the opening salvo:

When we allow petitioner to be sentenced to prison for six years for being a ‘member’ of the Communist Party, we make a sharp break with traditional concepts of First Amendment rights and make serious Mark Twain's lighthearted comment that ‘It is by the goodness of God that in our country we have those three unspeakably precious things: freedom of speech, freedom of conscience, and the prudence never to practice either of them.

Scales v. United States (1961) quoting Twain, Following the Equator (1903).   And Justice Harlan, dissenting in the reapportionment case of Whitcomb v. Chavis (1971), discusses the mathematical and theoretical models regarding vote dilution and includes as the entirety of a footnote this: " 'There is something fascinating about science. One gets such wholesale returns of conjecture out of such a trifling investment of fact.’ Mark Twain, Life on the Mississippi 109 (Harper & Row., 1965)."

The most recent constitutional law citation to Twain is not to one of Twain's pithy aphorisms, but to a simple observation in the nature of a travelogue.  Justice Stevens, once again uses Twain in his opinion for the Court, but this time in the text rather than a footnote:

The relevant facts are undisputed. . . .  All agree that Lake Tahoe is “uniquely beautiful,”  that President Clinton was right to call it a “ ‘national treasure that must be protected and preserved,’ ”  and that Mark Twain aptly described the clarity of its waters as “ ‘not merely transparent, but dazzlingly, brilliantly so’  [citations omitted].

The case is Tahoe-Sierra Preservation Council, Inc. v. Tahoe Regional Planning Agency (2002), quoting Mark Twain, Roughing It 174-175 (1872),in which the Court rejected a takings clause challenge to a moratorium on building in the area surrounding Lake Tahoe.

Listed below are links to weblogs that reference Mark Twain and Constitutional Law: