The newest question regarding Justice Thomas' ethical practices focuses on the Justice's nondisclosure of his wife's income. 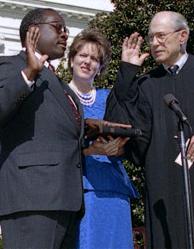 Justice Thomas has been criticized previously regarding funding of a private museum and for the Tea Party activities of his wife Ginny Thomas.   But this newest controversy focuses on Ginny Thomas' substantial income earnings.  Since 1997, according to a table prepared by the Alliance for Justice, she has been paid from various sources: in 1997-8 from then-House Majority Leader Dick Armey, in 2000-2008 from the Heritage Foundation, and in 2008-2009 (the last year reported) from Hillsdale College.  However, Justice Thomas recorded his wife's income during these years as "NONE" - - - although the known income was 1.6 million dollars.

A letter sent yesterday from 52 members of Congress to Chief Justice Roberts, as Presiding Officer of the Judicial Conference, urges a "referral to the Attorney General for further investigation."  The congressional members contend it would be very difficult for Justice Thomas to argue that he misunderstood the "filing instructions" given that he had disclosed his wife's income for the ten years before 1997, but then "misunderstood them for the next thirteen years."  The letter cites section 104(b) of the Ethics in Government Act of 1978, a provision that reads:

Unlike some other judicial ethical rules that do not apply to Supreme Court Justices as we previously discussed, the disclosure requirements under the Ethics in Government Act do seem to apply.  Section 101(f) includes as a covered employee: "(11) a judicial officer as defined under section 109(10)."  Section 109(10) defines “judicial officer” as "the Chief Justice of the United States, the Associate Justices of the Supreme Court, and the judges of the United States courts of appeals, United States district courts . . .  and any court created by Act of Congress, the judges of which are entitled to hold office during good behavior."

Listed below are links to weblogs that reference Justice Thomas' Continuing Ethical Woes: