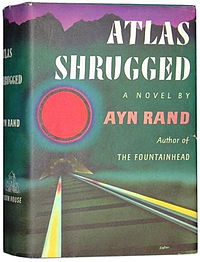 An interesting segment on NPR's Morning Edition comparing Ayn Rand's economic thoughts to pronouncements of current politicians.  Rand is the author of the novels Atlas Shrugged (1957) and The Fountainhead (1943).

The highlight is a 1959 interview with Rand by Mike Wallace, who asks about the United States' political direction of "the gradual growth of social, protective legislation, based on the principle that we are our brothers' keepers."

These programs are destroying individual liberties, Rand says, especially the freedom of producers, entrepreneurs, businessmen. The government has no right to take their property, she says.

"That's right," Rand replies. "I am opposed to all forms of control. I am for an absolute, laissez-faire, free, unregulated economy."

A video of the interview is available in 3 parts; here's part 1:

While the usual constitutional law link might be Lochner, Rand's interview could prompt an interesting discussion of Commerce Clause, Takings Clause, or Taxing Clause, or Campaign Finance cases - - - and of course the Affordable Care Act (last discussed here).

Listed below are links to weblogs that reference Atlas Shrugged and Economic Liberties:

Ayn Rand was "opposed to all forms of regulation"....except, of course, when it came time to collect her social security check. The same is true in case after case, mutatis mutandis, for modern "principled" libertarianism/conservatism in general. "I am opposed to all forms of control." What does that even mean? Perhaps it's time to lay to rest the pernicious myth of libertarianism as a serious, comprehensive basis for social policy?

I find it curious that Rand is treated as some sort of economic savant rather than the antagonist of a dystopian novel. Has everyone already forgotten that the current economic crisis was caused by financial institutions that produce very little? And those institutions received the largest welfare payout of all time from those who Rand refers to as the "moochers" and the "looters." And why doesn't someone comment on the obvious irony that her most rabid followers come from the fundamentalist Christian right? Do they not care about her views on religion or the tenets of their professed religion to care for the less fortunate?

Interesting interview. Ayn Rand's works are not just connected to current politicians. Justice Thomas has noted her influence on him too, as discussed in the following post: