The First Amendment and the Supreme Court - - - Building

The Supreme Court is the institution with ultimate authority to interpret the First Amendment.

The Supreme Court Building has been awarded special status by Congressional statutes with regard to the usual First Amendment practices. 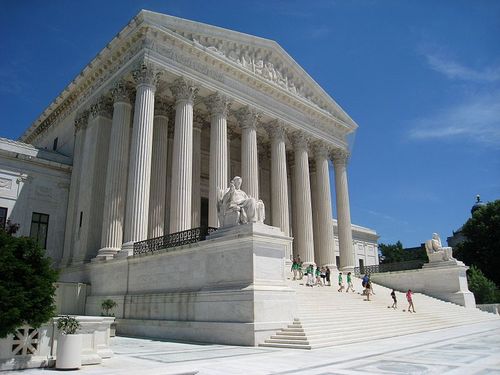 It shall be unlawful to parade, stand, or move in processions or assemblages in the Supreme Court Building or grounds, or to display therein any flag, banner, or device designed or adapted to bring into public notice a party, organization, or movement.

There have been challenges to the statutes on First Amendment grounds by those arrested for violating them.  For example, in 2005 several protesters were arrested for violating the statute as they protested against Abu Ghraib and Guantanamo Bay by wearing a black hood; an orange jumpsuit and black hood;  or holding a sign that read “no taxes for war or torture.”   As the DC Circuit, upholding their convictions in 2007, described the facts, they "ascended several steps from the sidewalk to the plaza in front of the Supreme Court building.   Supreme Court Police repeatedly asked appellants to return to the sidewalk and arrested them when they refused to do so."

In 2007 several protesters stepped out of their line on the Supreme Court plaza and unfurled a banner that read "Stop Executions."  Their conviction was affirmed in an opinion by the DC Court of appeals in Lawler v. United States.  Their petition for certiorari to the United States Supreme Court was denied (131 S.Ct. 3065, June 27, 2011).

In 2008 many protesters were arrested in a protest against Guantanamo Bay - - - again with the DC Court of Appeals upholding the convictions and rejecting the First Amendment challenge.  According to the 2011 DC Ct of Appeals opinion in Kinane v. US, one group of protesters in the plaza "knelt down with their hands behind their backs. Some of the demonstrators were wearing orange jump suits, and others were carrying signs that stated, “Shut Down Guantanamo.”"  Another group "gathered in the Upper Great Hall of the first floor of the Supreme Court building" chanting and wearing "orange t-shirts that stated, “Shut Down Guantanamo,” or dressed in orange jump suits; a few also had black hoods."

With recent arrests - - - including the high profile arrest of Cornel West outside the United States Supreme Court in conjunction with the "Occupy Wall Street" movement (video below) - - - the status of the Supreme Court Building as a "First Amendment free-zone" is again meriting attention.

Indeed, in United States v. Grace, Justice Marshall, concurring and dissenting, found this state of affairs "ironic."  In Grace, the Court declared that the special status could not extend to the sidewalks around the building, given their status as a traditional public forum.  Mary Grace had been holding a sign with the text of the First Amendment.

Listed below are links to weblogs that reference The First Amendment and the Supreme Court - - - Building: