Is the United States Constitution Worthy of Emulation?

It may not be, at least to the extent that it is considered a model worth emulation by other constitutional democracies.  In their important forthcoming article, David Law and Mila Versteeg argue that the United States Constitution has lost its stature - - - indeed, its hegemony - - - as a global influence on constitutional democracies.  The title of their article, The Declining Influence of the United States Constitution, says it all.

But what is exceptional about their article is that they set out to prove their thesis with statistical analysis.  They explain their quantative analysis with precision and care, achieving an admirable level of transparency.  One might not agree with a particular detail (or as they say, coding decision) but their explanations (including those in previous articles) are revealing.  Their analysis of "rights-related provisions" includes enforcement mechanisms, such as judicial review.  They also analyze judicial review in their structures discussion, as well as federalism and "presidentialism."   Their "waning influence" argument is given graphic illustration in a series of maps in which darker shades of blue represent closer similarity to the U.S. Constitution, while darker shades of red indicate greater dissimilarity: 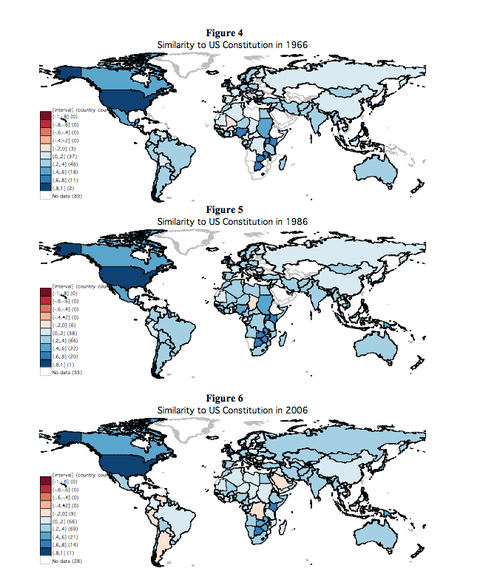 So if the United States Constitution's influence is waning, are there other constitutions that have gained prestige?  The top candidate is Canada.  Indeed, they come close to arguing that Canada is the new constitutional "super power."   (Canadian scholars may be particularly interested in this section, as well as in the maps similar to those above that illustrate their statistical findings).  Other candidates are Germany, South Africa, and India.  On the international level, they also examine human rights instruments, although they conclude that the results of their regression analysis offers little or no support for the notion that any of the three leading international human rights instruments have been widely emulated by constitution-makers.

This an essential article for anyone teaching Comparative Constitutional Law, especially for those trained in the United States Constitutional paradigm.  It's also a great article for ConLawProfs doing comparative work, or indeed anyone teaching constitutional law.  There is a great deal of "data" and charts as well as maps, but there is also a solid writing style and accessible interpretations.  There is also some speculation - - - and the implicit invitations to readers to contribute their own explanations.

And it does provide a different slant on the question of American exceptionalism and whether United States constitutional interpretation should ever consider foreign or international perspectives.

Listed below are links to weblogs that reference Is the United States Constitution Worthy of Emulation?: