ConLaw Prof Derrick Bell died yesterday at the age of 80.  As the NYT obit reports, Bell was known for his scholarly works, for his pioneering of critical race theory, for storytelling as scholarship, for being ethical, and for leaving a position at Harvard Law.  While the obit certainly does mention that Bell was a law professor, it does not emphasize that he was also a teacher. 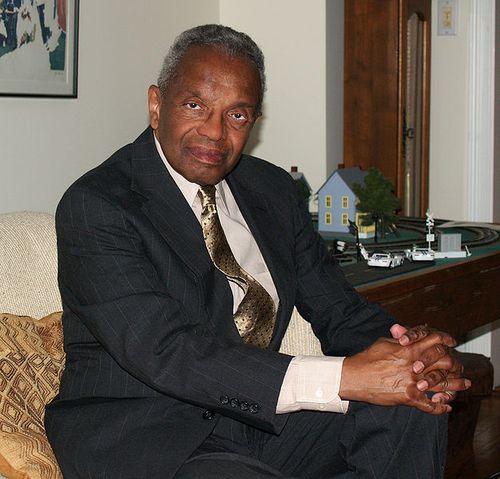 Bell's writing on Constitutional Law pedagogy deserves continuing attention.  Here is an excerpt from his 1998 essay published in Seattle University Law Review,  Constitutional Conflicts: The Perils and Rewards of Pioneering in the Law School Classroom:

By departing from the norm in constitutional casebooks and giving priority to "learning by doing" simulations, students mimic the kind of process that an attorney, researching an unfamiliar area of law, might utilize to investigate prior decisions. In practice, lawyers are called to research and to write; to comprehend legal arguments; to guess at the probable effect of and interaction between judicial, statutory, legal and policy arguments in court; to argue, persuade and debate; to work cooperatively with colleagues; and for some, to judge those arguments and decide cases and issues of law. This is as true in the practice of constitutional law as in any other. Once their research skills are in place, most students are aware that they have the capacity to learn, relatively quickly, whatever they need or want to know regarding any legal question.

Bell's Constitutional Conflicts was a casebook of sorts, modeled on this method to achieve active learning and participation.  His students seemed to thrive in the "Court of Bell."

For some law professors putting together such material and assessing the student products would deflect from their scholarly agenda.  But Derrick Bell took pedagogy as seriously as he took his many scholarly projects and his lecturing schedule.  Or maybe not so seriously: One of my fondest memories of him was as a co-panelist on an AALS Teaching section plenary, when he replied to a question by saying that teaching was fun.  And then he whispered to me that perhaps we'd better not tell everyone how much fun it really is.

Listed below are links to weblogs that reference In Memoriam: Derrick Bell:

What a beautiful tribute. Derrick Bell was certainly a giant in the academy - and will be sorely missed.