Funeral Protests: The Saga Continues with a Circuit Split

The United States Supreme Court's decision in Snyder v. Phelps last term has not solved the issue of the constitutionality of laws prohibiting protests at or near funerals. 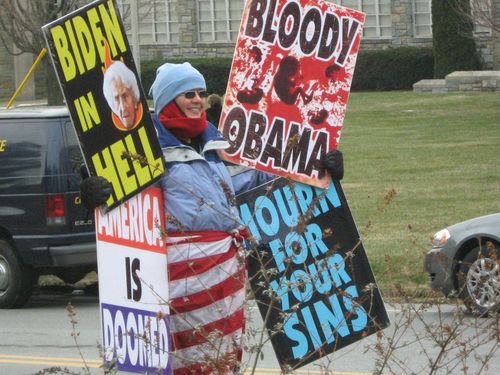 Such laws have become widespread in reaction to the activities of the same organization involved in Phelps with its penchant for protesting at funerals to express its views regarding "homosexuality," although the connection to sexuality is often tenuous at best.

However, while Snyder v. Phelps involved a damages award in favor of the father of the deceased for infliction of emotional distress, the circuit split involves enactments that seek to directly regulate funeral protests.

For example, a Manchester, Missouri ordinance prohibits "picketing or other protest activities . . .
within three hundred (300) feet of any residence, cemetery, funeral home, church, synagogue, or other establishment during or within one (1) hour before or one (1) hour after the conducting of any actual funeral or burial service at that place."

On the other hand, an Ohio statute provides that "no person shall picket or engage in other protest activities, nor shall any association or corporation cause picketing or other protest activities to occur, within three hundred feet of any residence, cemetery, funeral home, church, synagogue, or other establishment during or within one hour before or one hour after the conducting of an actual funeral or burial service at that place...."

One would assume that both of these enactments would share the same constitutional fate.  They are identical in their essentials: time (one hour before and after an actual funeral) and place (300 feet within specified places).

Yet the Manchester, Missouri ordinance was declared unconstitutional earlier this month by the Eighth Circuit in Phelps-Roper v. City of Manchester.

The Eighth Circuit's per curiam opinion is exceedingly cursory; the First Amendment analysis is two paragraphs.  The first paragraph disagrees with the district court that the ordinance was a content based regulation.  As for the second paragraph, it concludes that the district court was required to follow the Eighth Circuit precedent of Phelps-Roper v. Nixon, 545 F.3d 685 (8th Cir. 2008), another funeral protest statute case, this one involving the Missouri statute.

Judge Murphy's concurrence in the per curiam opinion - - - a concurrence that often reads like a dissent - - - makes clear how misguided it was for the panel to have been bound by the earlier Eighth Circuit case.  Murphy writes that in Nixon, the earlier case, "a panel of our court analyzed a quite different funeral protest statute and concluded that Phelps-Roper was "likely to prove any interest the state has in protecting funeral mourners from unwanted speech is outweighed by the First Amendment right to free speech.""

Indeed, the Missouri statute in Nixon did not have a "300 feet" provision, the kind of "zone" or "bubble" familiar in anti-abortion protest laws that have been upheld as constitutional.  Moreover, the procedural posture in Nixon was that of a preliminary injunction; the panel specifically stated it did not reach the merits of the claim.

Judge Murphy "respectfully" suggests that the United States Supreme Court opinion in Snyder v. Phelps "provides the proper method of analysis for deciding whether the Manchester ordinance is constitutional."

Listed below are links to weblogs that reference Funeral Protests: The Saga Continues with a Circuit Split: