The End of DADT: Litigation Moot but Still Worth Discussing?

The Ninth Circuit issued a per curium opinion today in Log Cabin Republicans v. United States dismissing the case as moot.  This is absolutely predictable.

Despite extensive litigation which we last mentioned here, with the repeal of 10 U.S.C. § 654(b) effective September 20, 2011, the policy known as DADT, "don't ask, don't tell,"  regarding sexual minorities in the military was no longer law.  Thus, a challenge to the statute's constitutionality is no longer a live "cae or controversy" under Article III. 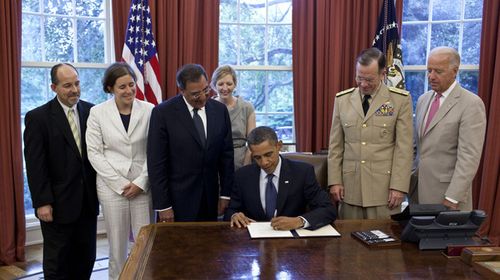 The Ninth Circuit opinion, however, is no so simple.  The panel considered and rejected two arguments by Log Cabin Republicans that the case should not be dismissed as moot.

First, the panel rebuffed the argument that while the injunctive relief might be moot, the declaratory relief might not be.  The speculation that "a future Congress whose composition, agenda, and circumstances we cannot know—will reenact Don’t Ask, Don’t Tell," or that the same Congress that enacted the Repeal Act could change course, was mere speculation and "our speculation cannot breathe life into this case."

Second, the panel strongly repudiated the claim of “collateral consequences” from a challenged statute even when the statute is repealed.  The panel resolved this issue by simply stating that any missed benefits discharged service members may have lost as a result of their separation pursuant to DADT were not legal penalties from past conduct, they did not fall within collateral consequences exception.  However, the panel went farther:

Because Log Cabin has stated its intention to use the district court’s judgment [holding DADT unconstitutional] collaterally, we will be clear: It may not. Nor may its members or anyone else. We vacate the district court’s judgment, injunction, opinions, orders, and factual findings—indeed, all of its past rulings—to clear the path completely for any future litigation. Those now-void legal rulings and factual findings have no precedential, preclusive, or binding effect. The repeal of Don’t Ask, Don’t Tell provides Log Cabin with all it sought and may have had standing to obtain.

Judge Diarmuid O'Scannlain wrote a specially concurring opinion, as lengthy as the per curium decision, devoted not to the question of mootness, but to share his thoughts about Lawrence v. Texas:  "I write separately because our inability to reach the merits may leave uncertainty about the role Lawrence v. Texas, 539 U.S. 558 (2003), may have in substantive due process challenges. Although Congress spared us the need to reach the merits in this case, other such challenges will come to the courts."

Listed below are links to weblogs that reference The End of DADT: Litigation Moot but Still Worth Discussing?:

Interesting. I wonder if the use of the mootness doctrine is really being used as either a sword or a shield. Here, this prudential judicial tool was used as a shield for pro repeal DADT activists. However, this finding raises another argument. Yes Dan Choi (go my fellow Asian American!) is out there keeping the fire going on this issue, but many discharged gay soldiers are still waiting to have their statuses reversed. What was really put to press within the Act? What demands were clearly mandatory towards the military leaders? Is there really no longer a case or controversy? In some sense, I have a hard time believing this to be true. Lack of enforcement or even a poorly constructed Act that doesn't have the necessary push to really implement change in this historically traditional institution that we call the American military. If the Ninth Circuit solidifies a belief that the DADT issue is no longer a case or controversy, could this opinion potentially backfire on the unlikely of victims-those pro-repeal DADT activists? Why not a ripeness issue instead? Anti-DADT activists' failure to show an imminent injury-a failure to show substantial consequences to themselves because they requested litigation too early. Instead, I can see potential future problems with this symbolic-like notion that DADT is no longer a case or controversy...e.g., an influx of discriminatory recruitment practices, proving that "they" don't purposely move or reinstate openly gay soldiers to undesirable divisions, etc...