On Justice Goodwin Liu's first day sitting as a justice on the California Supreme Court, the matter before the court was one the court has encountered several times before: same-sex marriage.  However, Liu is not the only new Justice; 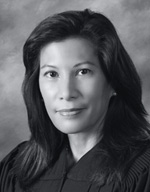 The question is this:

The Ninth Circuit wants the question answered in order to assist it in determining whether the proponents, who seek to appeal the decision of federal district court judge Vaughn Walker, have Article III standing to invoke the power of the federal judiciary on appeal.

The general rule for Article III standing requires satisfaction of several elements.  First, the moving party must have "injury in fact" by suffering injury to a “legally cognizable interest," and the injury must be concrete and particularized as well as actual or imminent.  Secondly, there is a causation element: the injury in fact has to be fairly traceable to the challenged action of the opposing party.  Finally, there must be a substantial likelihood that the injury would be redressed if the party were awarded a favorable decision by the court.  This is not an examination of the merits, but requires a finding that the injury is capable of being redressed assuming the party prevailed. 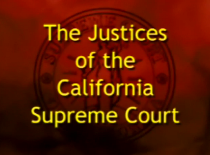 The California Supreme Court is thus not determining the issue of federal court standing and its opinion will not be outcome determinative for the Ninth Circuit.  However, if the California Supreme Court holds that the proponents do not have a "particularized interest in the initiative's validity" and that the proponents do not have "authority to assert the State's interest in the initiative's validity" under state law, this would mean that the proponents will have great difficulty satisfying the "injury in fact" element of Article III standing.

From the oral argument webcast, there is little indication of the California Supreme Court's views.  Under state rules, the court must render its decision in 90 days.

UPDATE: Watch the full video of the oral argument:

Listed below are links to weblogs that reference Prop 8 Goes Back to the California Supreme Court on Certified Question:

Thank you for this posting. I find it truly inspiring that for the first time in U.S. history, the seven member high court of the State of California will have three Asian justices holding office. As you mentioned Justice Tani Gorre Cantil-Sakauye (the first Asian-Filipina American and second woman to serve as the state’s Chief Justice) and Justice Goodwin Lin (Taiwanese-American), and Honorable Ming W. Chin (Chinese American) who has served as an Associate Justice since 1996. Interestingly, Justice Lin, appointed by President Barack Obama, is considered to be the high court’s only Democrat.

With regards to Perry v. Brown, I think the outcome of the case will have a significant impact across the nation—it may bring us one step forward or three steps backward regarding same-sex marriage. In particular, your last point has left me wondering: if, say the California Supreme Court does not find that the proponents of Proposition 8 have a "particularized interest in the initiative's validity" and that they do not have "authority to assert the State's interest in the initiative's validity" under state law, what may the proponents of Prop 8 argue is an “injury of fact” to have Article III standing in the Ninth Circuit?

For now, I can imagine the proponents of Prop 8 making the following argument:

(1) Prop 8 supporters suffered injury to a legally cognizable interest because the state of California is not enforcing the law passed by the people of the state (ballot vote in favor of Prop 8 passed by 52.25%). However, I think the Ninth Circuit will probably reject this argument. This line of thinking brings me back to the Allen v. Wright. In this U.S. Supreme Court case parents of black children in public schools sought a declaratory and injunctive relief to require the IRS to issue guidelines to deny tax exemptions to all racially discriminatory private schools. Justice O’Conner, delivering the majority opinion, stated that “an asserted right to have the Government act in accordance with law is not sufficient, standing alone, to confer jurisdiction on a federal court.” The Court decided that the mere act of the Government providing financial aid to discriminatory private schools was not enough to constitute a “judicially cognizable injury”. Similarly, the proponents of Prop 8 may argue they have a “shared individual right” to have a Government act in accordance with the law, particularly state law voted by the people. But, I think they will have a difficult time making this argument because as explained above, the Supreme Court has already found this reasoning unpersuasive.

The outcome of Prop 8 is historical, monumental, and heartbreaking at the same time. To live in the 21st Century where fellow constituents do not legally have the same rights as, say, a heterosexual, is shameful. In respect to standing, I am moved by the underlying theories of interpretation to political control. How can one, a person, who has the right to privacy in what he or she does in her bedroom, be forced to explain, to analogize, to clarify that his or her actions are constitutionally permissible. Based on the first element of standing, answering to strangers, to the justices, enough of a "harm" that would be encompass an injury that is concrete and particularized? Have we as a society, become immune to answering the aged old question, what's your preference? So quick to answer with a witty tongue and a flip of constitutional fluttery that would wow any constitutional law professor. Let's go back to ideology for a moment. How is this crux of humanity, this obvious natural right, this civil right, not carried on the backs of representation-reinforcement. Why even have the Borkean argument? A textural interpretation would automatically exclude women, minorities, as well as the LGBT community. I fear that we, as constitutional scholars, as the "good-doers" of the lawyering pack of wolves, will have to always answer to some ideal, some standard already approved, stamped, and branded. Identify the injury being vindicated, the justice will ask. None of your business, would be my reply.

Ted Olson noted that if CA was truly "not enforcing the law" that his clients would be married today. What CA (and Obama as to a portion of DOMA) is doing to my knowledge is not defending the law in court.