The Ninth Circuit has upheld the constitutionality of subsection(a) of the "Stolen Valor Act" in a brief  opinion in United States v. Perleman.  Perleman wore the Purple Heart, which he had actually been awarded by the US Air Force, but under a fraudulent claim.  (Apparently Mr. Perleman shot himself in the thigh, but claimed it was a shrapnel injury from his service in Viet Nam 20 years earlier; he also collected disability benefits from the military). 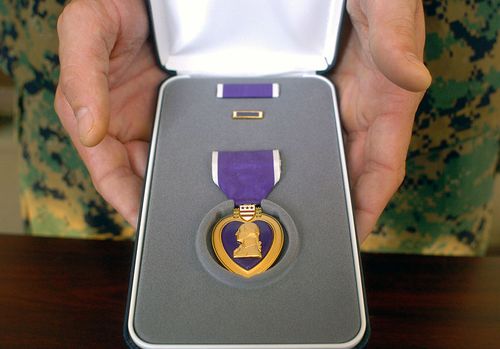 The Perleman opinion is noteworthy because it distinguishes subsection(a) of 18 USC §704 from subsection(b)  which the Ninth Circuit held unconstitutional last year in United States v. Alvarez.  In Alvarez, the legnthy opinion of the panel highlighted that the criminal provision regulated "only words" and moreover the words targeted "words about a specific subject: military honors," and was thus a content-based regulation subject to strict scrutiny.

Our decision in Alvarez under § 704(b) does not control the question whether § 704(a) is facially overbroad. The starting point for our analysis in Alvarez was the recognition that § 704(b) criminalizes pure speech. The critical part of the reasoning was that § 704(b) “makes criminal the speech itself regardless of any defining context.”  We also found it important that § 704(b) lacks “a scienter requirement to limit the Act’s application.” By contrast, here, Defendant effectively argues that the First Amendment protects the fraudster’s knowingly fraudulent activity: knowingly wearing a military medal without authorization and with intent to deceive. Whereas § 704(b) criminalizes pure speech, § 704(a) criminalizes certain specified activities limited by a scienter requirement.

The panel considered the statute under the O'Brien test for conduct-as-speech, with a summary analysis. The Court also discussed Schacht v. United States, 398 U.S. 58 (1970), in which the Supreme Court addressed a constitutional challenge to 18 U.S.C. § 702, which bars the unauthorized wearing of military uniforms, although of course in Schacht the Court did find the provision in another statute that prohibited criticizing the government while wearing a uniform unconstitutional as a viewpoint regulation.

Listed below are links to weblogs that reference No First Amendment Right to Wear Unauthorized Military Medal: