The "occupation" of Wall Street by people seeking to bring attention to financial greed and misdeeds has provoked some arrests, including arrests for violating New York's longstanding loitering statute, Penal Law §240.5. 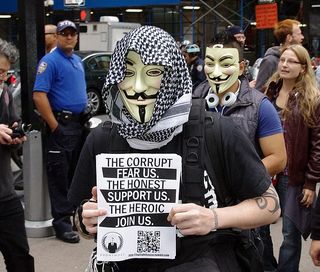 Being masked or in any manner disguised by unusual or unnatural attire or facial alteration, loiters, remains or congregates in a public place with other persons so masked or disguised, or knowingly permits or aids persons so masked or disguised to congregate in a public place; except that such conduct is not unlawful when it occurs in connection with a masquerade party or like entertainment if, when such entertainment is held in a city which has promulgated regulations in connection with such affairs, permission is first obtained from the police or other appropriate authorities;

A panel of the Second Circuit, including now-Justice Sotomayor, unanimously reversed the district judge who had held the statute unconstitutional under the First Amendment.  The Second Circuit traces the history of the mask provision to the "Anti-Rent era” in New York history, running from 1839 to 1865, involving conflicts between the landlords and tenants of vast manorial estates in New York, and including violence by tenants who disguised themselves.  [While the court does not mention it, the provision was originally part of the vagrancy statutory scheme repealed in 1967, and a host of other states have masking or other disguise statutes, which at times have prohibited gender inappropriate clothing].

The court relied on the specific New York history, "indisputably aimed at deterring violence and facilitating the apprehension of wrongdoers," coupled with the particular case of the KKK regalia, in which the mask added nothing to the expressive attire of the robe and hood, and quickly dispatched the claims of expressive conduct without the necessity for engaging in balancing under United States v. O'Brien, 391 U.S. 367 (1968).  The court also rejected the claims of entitlement to anonymous speech and that the enforcement against the KKK would be viewpoint discrimination.

However, those arrested this week on Wall Street might still argue that the statute is unconstitutionally applied to them.  The protesters are certainly different from the KKK and have less of a connection to violence.  The "masquerade party and like entertainment" of the statute as an exception is a rather broad one it seems.  Indeed, at the Herald Square subway stop last evening, I was entertained by a masked person playing a cello, and "masquerade" is a common occurrence on the subways and streets of NYC.

More about the protests is available on AdBusters, with a good discussion of the purpose; daily updates are available on occupywallstreet; the NYT discusses the arrests for mask violations and more arrests;  and The Colbert Report snippet below provides a semi-serious perspective.

This would be a great topic for in-class discussion in First Amendment.

Listed below are links to weblogs that reference Loitering While Masked: The Wall Street Protest Arrests:

Oh, Wall Street protesters go there with the full understanding that they face arrest. Civil disobedience as a means of nonviolent protest on Wall Street is old hat, and the law against congregating or loitering in disguise actually makes some sense. So does breaking that law and accepting the consequences of arrest and misdemeanor conviction in pursuit of non-violent protest actions. I don't really see a controversy here - and I am very much pro-masked protester, personally, from my radical activist college days.