The name of the Florida Law is "An act relating to the privacy of firearm owners": it prohibits medical care providers from asking their patients about gun ownership and recording such information.  The Act, passed in 2011 and signed by controversial Florida Governor Rick Scott, was touted as preventing doctors from asking questions about a constitutional right and therefore protecting that right. 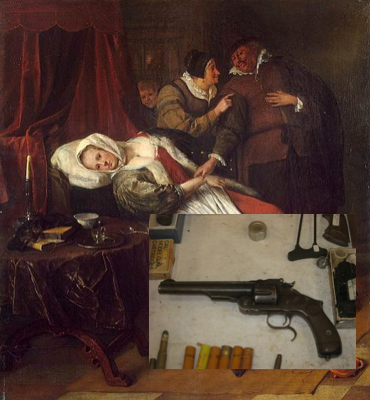 Judge Marcia Cooke of the Southern District of Florida entered an Order Granting a Preliminary Injunction in Wollschlaeger v. Farmer, enjoining enforcement of the Florida statute.

Judge Cooke rejected the relevancy of the Second Amendment argument of the State of Florida: "The State has attempted to inveigle this Court to cast this matter as a Second Amendment case. Despite the State's insistence that the right to "keep arms" is the primary constitutional right at issue in this litigation, a plain reading of the statute reveals that this law in no way affects such rights."

Instead, Judge Cooke analyzed the law under the First Amendment.  The statute, Judge Cooke observed, curtails medical practitioners' ability to inquire about whether patients own firearms and burdens their ability to deliver a firearm safety message to patients, under certain circumstances, and thus implicates practitioners' First Amendment rights of free speech.  She also observed that the statute also implicates patients' freedom to receive information about firearm safety, which the First Amendment protects."

Judge Cooke analyzed the standing issues, quickly and accurately determining the plaintiffs had standing, rejecting the State's argument that the statute was merely horatory.  She then discussed the First Amendment arguments, situated within the discussion of the likelihood of success on the merits in the preliminary injunction standard.

At the center of Cooke's analysis was the Court's decision last term in Sorrell v. IMS, in which the Court held unconstitutional a state statute seeking to regulate datamining of prescription information.  However, Cooke clearly viewed the Florida statute as meriting strict scrutiny, holding that it directly targets speech based on its content.  Judge Cooke also analogized to the "hate speech" case of R.A.V. v. City of St. Paul (1992), noting that Florida has prohibited "harassment and discrimination" by doctors only on the subject of firearm ownership.

As for satisfying the compelling interest prong of the strict scrutiny test, Judge Cooke wrote that the State "provides no case law indicating that preventing practitioners from harassing or discriminating against a patient based on firearm ownership constitutes a compelling government interest. Further, the State "fails to provide any specific evidence, beyond anecdotal information, that such "harassment" and "discrimination" is widespread or pervasive. It is unlikely that a concern for some patients who may be offended or uncomfortable by questions regarding firearm ownership could justify this law."

As for the "least restrictive means" prong, the Judge held that the State does not explain why the extant state and federal laws protecting patient privacy are insufficient to protect the privacy interests, and discussed various other suggestions by the health practitioners.

Judge Cooke explicitly refused to "speak to the wisdom of the legislation now before me," given her judicial role.  And indeed, her opinion is a fine exemplar of judicial craft.   At 22 pages, it is succinct yet sufficient, well-written and well-organized.  Sure to be appealed, it is likely to be upheld, if the Eleventh Circuit Judges exercise good judgment.

RR
[image: The Doctor's Visit by Jane Steen, circa 1714, via, with antique gun overlay].

Listed below are links to weblogs that reference Federal Judge Enjoins Florida Prohibition Against Physicians Asking Patients About Firearms: