A divided three-judge panel of the Seventh Circuit ruled on Monday in Vance v. Rumsfeld that a Bivens suit by two Americans alleging that former Secretary of Defense Donald Rumsfeld authorized their torture can move forward. 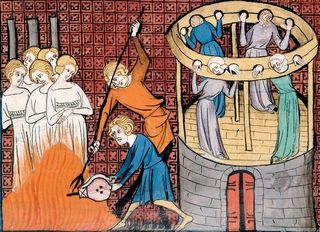 If the case sounds familiar, that's because it is: Just last week, Judge Gwin (D.D.C.) ruled in Doe v. Rumsfeld that a nearly identical suit can move forward.  (The plaintiffs in the suits alleged similar torture at the same site, Camp Cropper, the U.S. military prison in Iraq.)  The key difference between these cases and the D.C. Circuit's rejection of a torture claim against Rumsfeld in June: The plaintiffs here are U.S. citizens; the plaintiffs in the D.C. Circuit case, Arkan v. Rumsfeld, were aliens.  (The D.C. Circuit ruled that it wasn't clearly established in 2004, the time of the actions there, that the Fifth and Eighth Amendments applied to aliens detained abroad; Rumsfeld thus had qualified immunity.)

Judge Hamilton's opinion in Vance, joined by Judge Evans, tracked Judge Gwin's reasoning, but with over 80 pages of detail.  The meaty opinion seems carefully tailored to withstand any appeal.

In short, the court ruled that the plaintiffs sufficiently pleaded their allegations that Secretary Rumsfeld authorized treatment that violated the Fifth Amendment's Due Process Clause (substantive due process)--and that he reasonably should have known it.  The court thus ruled that the plaintiffs pleaded facts sufficient to satisfy the pleading standard in Ashcroft v. Iqbal and that Rumsfeld did not qualify for immunity.  The court also ruled that there was no reasonable alternative way for the plaintiffs to bring their claims and that there were no special factors counselling against a Bivens remedy.  In particular, the court rejected the defendants' separation-of-powers arguments--like those in Doe--that courts don't have any business in cases dealing with national security and foreign affairs, especially in times of war.  Here's a flavor of what the court said on that point:

The unprecedented breadth of defendants' argument should not be overlooked.  The defendants contend that a Bivens remedy should not be available to U.S. citizens for any constitutional wrong, including torture and even cold-blooded murder, if the wrong occurs in a war zone.  The defendants' theory would apply to any soldier or federal official, from the very top of the chain of command to the very bottom.  We disagree and conclude that the plaintiffs may proceed with their Bivens claims.

Judge Minion wrote in dissent that the court improperly extended Bivens to this case--a case in which "United States citizens alleg[ed] torture while held in an American military prison in an active war zone."  Op. at 81.

Listed below are links to weblogs that reference Seventh Circuit Allows Torture Suit Against Rumsfeld to Move Forward: