The Office of Legal Counsel issued an opinion in early June (but released late last month) that the government's obligation to notify an employee who appeals a denial of a security clearance of evidence obtained through electronic surveillance may violate separation-of-powers principles and executive privilege.

The Foreign Intelligence Surveillance Act requires the government to notify an "aggreived person," a target 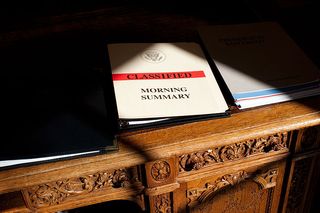 of electronic surveillance, whenever the government intends to use information obtained through electronic surveillance against that person.  The OLC ruled that this requirement also applies to proceedings before the Access Review Committee--the tribunal that reviews employee appeals of denial of security clearances.

But the OLC also said that this requirement will sometimes (but rarely) violate separation-of-powers principles and require disclosure of information covered by executive privilege.  If so, the requirement yields to the Constitution.

The OLC said that Congress has some "authority to legislate in a manner that touches upon disclosure of classified information."  Op. at 7.  "For example, we believe Congress's authority to regulate foreign intelligence surveillance under FISA, and to regulate the terms of federal employment, does, as a general matter, permit Congress to impose the notification requirement . . . even when that requirement reaches proceedings concerning security clearance revocations."  Op. at 7-8.

But that authority ends when it runs up against "the President's ability to perform his constitutional duty."  Op. at 8 (quoting Morrison v. Olson).  "Congress may not, for example, provide Executive Branch employees with independent authority to countermand or evade the President's determinations as to when it is lawful and appropriate to disclose classified information."  Op. at 8 (citing Whistleblower Protections for Classified Disclosures, 22 Op. OLC at 100).  "And, as noted above, Congress's authority is 'subject only to whatever limitations the Executive privilege may be held to impose upon such congressional ordering.'"  Op. at 8 (quoting EPA v. Mink).  Thus the notice requirement could violate separation-of-powers or require disclosure of information protected by executive privilege; if so--and this should be rare, OLC says--the requirement gives.

Listed below are links to weblogs that reference OLC Says Some Notifications in Security Appeals May Violate Separation of Powers: