Hurricane Irene and the Constitutional Duty to Protect the Incarcerated

As New York City braces for Hurricane Irene, with the transit system being halted since noon today, and 300,000 people ordered to evacuate low-lying areas in the five boroughs, according to NYC Mayor Michael Bloomberg there are absolutely no plans to address the situation of inmates at the city's main detention center on Rikers Island. 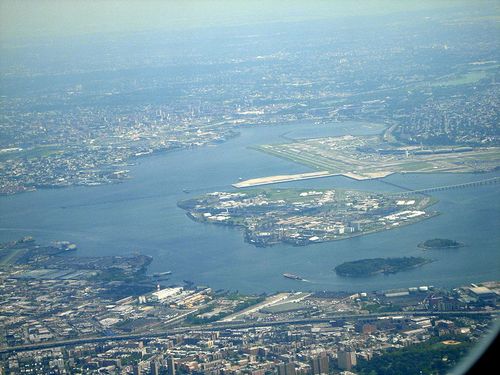 Rikers Island (pictured right) is indeed an island; it is located in the East River between Queens and the Bronx, due east of Manhattan. It practically touches the runways of LaGuardia airport, from which all flights have been suspended today and Sunday.

more than three-quarters of Rikers Island’s 400 acres are built on landfill–which is generally thought to be more vulnerable to natural disasters. Its ten jails have a capacity of close to 17,000 inmates, and normally house at least 12,000, including juveniles and large numbers of prisoners with mental illness–not to mention pre-trial detainees who have yet to be convicted of any crime. There are also hundreds of corrections officers at work on the island.

Today, the Center for Constitutional Rights (CCR) urged the City to act immediately to protect the prisoners.

In Lessons from Hurricane Katrina: Prison Emergency Preparedness as a Constitutional Imperative, published in University of Michigan Journal of Law Reform and available on ssrn, Professor Ira Robbins considers the fate of the more than 8,000 residents of the Orleans Parish Prison (OPP) when Hurricane Katrina struck. Robbins notes that despite a "mandatory evacuation of New Orleans, these men and women, some of whom had been held on charges as insignificant as public intoxication, remained in the jail as the hurricane hit, and endured days of rising, toxic waters, a lack of food and drinking water, and a complete breakdown of order within OPP. When the inmates were finally evacuated from OPP, they suffered further harm, waiting for days on a highway overpass before being placed in other correctional institutions, where prisoners withstood exposure to the late-summer Louisiana heat and beatings at the hands of guards and other inmates"

Robbins argues that the situation was not merely tragic, but was unconstitutional - - - violating the prisoners Sixth and Eighth Amendment rights, as well as international human rights standards.  He advocates that change should occur through a mix of litigation and legislation, including the establishment of emergency courts "to enable the administration of justice to resume promptly following serious natural or man-made disasters."

In his 2008 article, Robbins urged government officials to "internalize the lessons of Hurricane Katrina, which demonstrated the consequences of inadequate preparation and planning for prisoners' safety during and after a major emergency."

New York City does not seem to be heeding Professor Robbins' advice.

Listed below are links to weblogs that reference Hurricane Irene and the Constitutional Duty to Protect the Incarcerated:

Even prisoners should have the rights to be safe in times of great danger. The government should do their duties and responsibilities to all of the citizen.