In their complaint, clergy members from the Episcopal, Methodist, and Roman Catholic churches allege that HB56 "runs counter to the Christian spirit of compassion. The law is unconstitutional and a direct affront to the recognized and accepted Word of God. Because Alabama citizens are entitled to freely exercise their religion to show mercy to all people regardless of their immigration status." 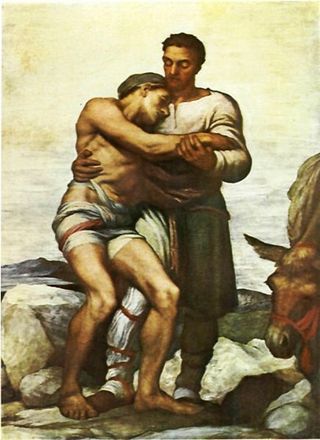 The gravamen of the complaint in Parsley v. Bentley is the conflict between Christian duties of hospitality and the statute's mandate to be "inhospitable" to immigrants.

For example, the complaint alleges that if enforced, "Alabama's Anti-Immigration Law"  will "make it a crime to follow God's command to be Good Samaritans" citing Luke 10:25-37  and "will place Alabama church members in the untenable position of verifying individuals' immigration documentation before being able to follow God's Word to 'love thy neighbor as thyself'" citing Matthew 22:39.

More specifically, the complaint raises particular instances that might result in the prosecution of clergy or church members.  For example, a clergy member might be prosecuted for not verifying the immigration status of persons before performing a marriage or a baptism.  A church member might be prosecuted for transporting "a fellow congregant" or providing "shelter to a person needing help" without verifying immigration status.

While the complaint has six causes of action, including a contracts clause claim, but without a supremacy clause claim, it is obviously that the First Amendment Free Exercise of Religion claim is central and most unique. While some allegations of the complaint could extend to any number of laws, the allegations regarding central church activities might be viewed favorably by the United States district judge.

Listed below are links to weblogs that reference Clergy Complaint Against Alabama Immigration Law: