New York's same-sex marriage statute, passed June 24, 2011, became effective Sunday, July 24, amidst a great deal of marrying covered in many press venues, including from the NYT covering events throughout NY, at the traditional honeymoon site of Niagra Falls, the state capitol Albany, and New York City, not to mention a special style section. 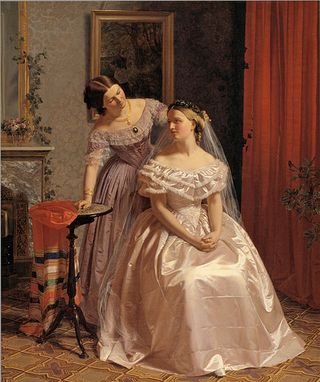 There has been some controversy regarding the religious exemptions in the statute, including the role of town clerks, but now there is a broader challenge to the statute.

The statute was challenged in a complaint (h/t Capitol Confidential) filed today by a group called New Yorkers for Constitutional Freedoms, which describes its mission on its website thusly: "As a Christian ministry, NYCF exists to influence legislation and legislators for the Lord Jesus Christ." (emphasis in original).

In Seeking declaratory and injunctive relief, the Plaintiffs in this case seek to preserve not only marriage as the union of one woman to one man, but also our constitutional liberties by acting as a check on an out-of-control political process that was willing to pass a bill regardless of how many laws and rules it violated.

According to the complaint, the violations included:

Once notorious as having a legislative process known as  "three men in a room"  - - - discussed in a 2006 book with that name - - - many observers believe the process has actually improved.  However, the state constitution, as the complaint points out, requires "the doors of each house [of the legislature] shall be kept open, except when the public welfare shall require secrecy." NY Const. Article III, section 10.  The Senate "lock-out" of "lobbyists" in its "lobby" is argued as violating this provision.

Jimmy Vielkind, reporting for Capitol Confidential, of the Albany Times-Union, provides some reactions to the lawsuit.  Vielkind also reports that the NY State Open Meeting law claim has a very small chance of success: "Fun fact: the state legislature has a specific, blanket, exemption from the Open Meetings Law that was enacted into law in 1985, according to Bob Freeman, executive director of the Committee on Open Government at the Department of State."   Indeed, the statute's legislative exemption is exceedingly broad.

RR
[image: Bride Embellished by Her Girlfriend, by Henrik Olrik, circa 1859, via]