Not a "True Threat": The Ninth Circuit Holds Anonymous Threats to Obama Protected

In an opinion today in United States v. Bagdasarian, the Ninth Circuit reversed Bagdasarian's conviction, holding that his statements did not rise to the constitutionally required level of "true threats." At issue was U.S.C. § 879(a)(3), providing it is a felony to threaten to kill or do bodily harm to a major presidential candidate.

Judge Stephen Reinhardt, writing for the panel and joined by Chief Judge Alex Kozinski, over a partial dissent by Judge Kim McLane Wardlaw, begins by discussing the context:

"The election of our first black President produced a campaign with vitriolic personal attacks and, ultimately, sentiments of national pride and good will. The latter was shortlived on the part of some, politicians and non-politicians alike, and the vitriol continued as President Obama’s term of office commenced."

It soon becomes clear why the opinion begins this way, as the statements of Walter Bagdasarian, who the opinion characterizes as "an especially unpleasant fellow,"  are racist as well as violent.  Bagdasarian under the user name “californiaradial,” posted his statements on a Yahoo! Finance — American International Group message board, "an internet site on which members of the public could post messages concerning financial matters, AIG, and other hot topics of the day."

The panel rejected the government's argument that Bagdasarian's anonymity contributed to the "true" quality of the threat.  "We grant that in some circumstances a speaker’s anonymity could influence a listener’s perception of danger," but here, "the financial message board to which he posted them is a non-violent discussion forum that would tend to blunt any perception that statements made there were serious expressions of intended violence."

The panel also rejected the relevance of two other facts deemed important by the government.  First, one of Bagdasarian's statements referred to a "50 cal" and Bagdasarian did indeed possess .50 caliber weapons and ammunition in his home.  Second, he later sent an email that, while it did not mention Obama, did refer to a "50 cal" used on a car and included a video of junked cars being blown up.  The panel noted:

Nobody who read the message board postings, however, knew that he had a .50 caliber gun or that he would send the later emails. Neither of these facts could therefore, under an objective test, “have  bearing on whether [Bagdasarian’s] statements might reasonably be interpreted as a threat” by a reasonable person in the position of those who saw his postings on the AIG discussion board.

The panel very carefully discusses both the objective and subjective tests, making this opinion a terrific one for classroom use.  It would also be a great class exercise given Wardlaw's extensive dissent.

Intriguingly, while still in the first paragraph, Reinhardt's opinion invokes Scalia and American history, criticizing a 1995 dissenting opinion by Scalia, McIntyre v. Ohio Elections Comm’n, 514 U.S. 334, 382 (1995) (Scalia, J., dissenting), because it "uncharacteristically overlooked the experience of our Founding Fathers."  Reinhardt remedies this with several examples, including:

In the country’s first contested presidential election of 1800, supporters of Thomas Jefferson claimed that incumbent John Adams wanted to marry off his son to the daughter of King George III to create an American dynasty under British rule; Adams supporters called Jefferson “a mean-spirited, low-lived fellow, the son of a half-breed Indian squaw, sired by a Virginia mulatto father.

Yet Reinhardt soon brings the discussion up to date: "Still, the 2008 presidential
election was unique in the combination of racial, religious, and ethnic bias that contributed to the extreme enmity expressed at various points during the campaign.  Much of this bias was misinformed because although the presidential candidate was indeed black, he was neither, as some insisted,
Muslim nor foreign born."  He also supports these statements with extensive footnotes. 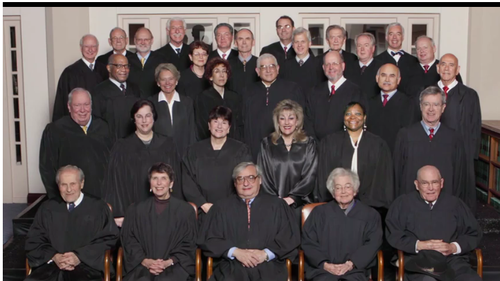 Reinhardt was quoted by the LA Times in a story yesterday about the high rate of reversal of the "liberal" Ninth Circuit (pictured above via) by the more conservative Supreme Court.

Reinhardt said he didn't feel personally reprimanded [by Supreme Court reversals]  because the justices often employ strong language to express their disagreement, usually with one another.

"If anything, it's a compliment. I get treated like the others on the [Supreme] Court," he said in an interview with The [LA] Times.

Listed below are links to weblogs that reference Not a "True Threat": The Ninth Circuit Holds Anonymous Threats to Obama Protected: