July 4: Declaration of Independence in the Supreme Court Term 2010-2011

The signing of the Declaration of Independence on July 4, 1776, is the genesis of the "Fourth of July" holiday. 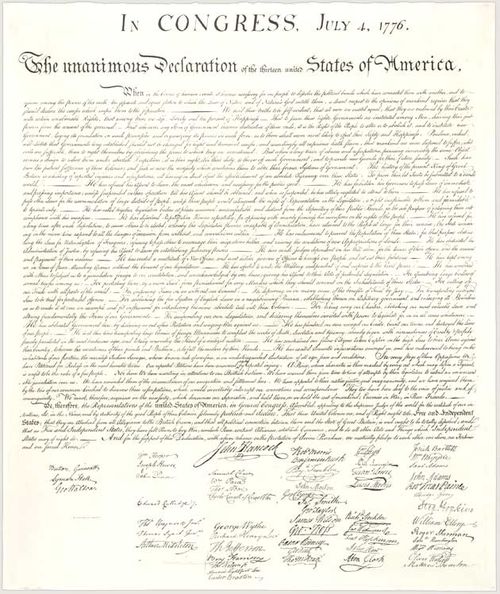 This past term, the Declaration of Independence figured in two United States Supreme Court opinions, both decided late in the term and both in the opinion for the Court.

In Stern v. Marshall, discussing the bankruptcy courts, Justice Roberts writing for the Court included a reference to the Declaration:

Article III protects liberty not only through its role in implementing the separation of powers, but also by specifying the defining characteristics of Article III judges. The colonists had been subjected to judicial abuses at the hand of the Crown, and the Framers knew the main reasons why: because the King of Great Britain “made Judges dependent on his Will alone, for the tenure of their offices, and the amount and payment of their salaries.” The Declaration of Independence ¶ 11. The Framers undertook in Article III to protect citizens subject to the judicial power of the new Federal Government from a repeat of those abuses.

The Court concluded that the bankruptcy court - - - a federal but non-Article III court - - - lacked constitutional power to adjudicate a final order on a state law claim.

In Borough of Duryea, Pa. v. Guanieri, regarding the First Amendment right to petition, Justice Kennedy, writing for the Court, also referred to the Declaration.  After discussing the Magna Carta, the Petition of Right (1628), and practices in England, the opinion noted:

Nevertheless, the Court rejected the right to petition under the First Amendment as the basis of a claim for relief for the original plaintiff.

Listed below are links to weblogs that reference July 4: Declaration of Independence in the Supreme Court Term 2010-2011: