In a brief order today, the Ninth Circuit lifted its previous stay of District Judge Virginia Phillips injunction against the enforcement of the military's don't ask, don't tell policy with regard to sexual orientation.   Recall that the policy codified at 10 U.S.C. § 654 requires that a member of the Armed Forces "shall be separated" from military service under one or more of the following circumstances.

In Log Cabin Republicans v. United States, Judge Phillips found not only that the government's articulated interest in military readiness and unit cohesion was not served by the policy, but that the policy actually undermined the government interests.  Thereafter, the Ninth Circuit granted the DOJ Motion and stayed the district court's injunction (and refusal to stay the injunction) of the military's "don't ask don't tell" policy which the judge had declared unconstitutional. 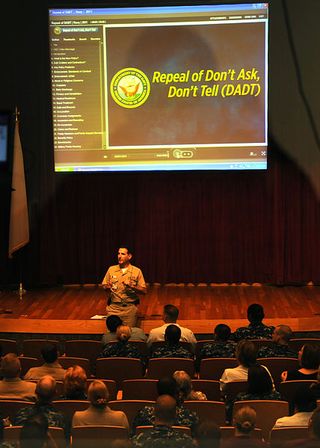 Today, the three judge panel (Kozinski, Wardlaw, and Paez) of the Ninth Circuit lifted its stay because the "balance of hardships have changed," interestingly citing DOMA developments:

In their briefs, appellants/cross-appellees do not contend that 10 U.S.C. § 654 is constitutional. In addition, in the context of the Defense of Marriage Act, 1 U.S.C. § 7, the United States has recently taken the position that classifications based on sexual orientation should be subjected to heightened scrutiny. See Golinski v. U.S. Office of Pers. Mgmt., No. C 3:10-00257-JSW (N.D. Cal.) (Doc. 145, July 1, 2011) (“gay and lesbian individuals have suffered a long and significant history of purposeful discrimination”); Letter from Attorney General to Speaker of House of Representatives (Feb. 23, 2011) (“there is, regrettably, a significant history of purposeful discrimination against gay and lesbian people, by governmental as well as private entities”). Appellants/cross-appellees state that the process of repealing Section 654 is well underway, and the preponderance of the armed forces are expected to have been trained by mid-summer. The circumstances and balance of hardships have changed, and appellants/cross-appellees can no longer satisfy the demanding standard for issuance of a stay.

Thus, the don't ask, don't tell policy of the military is enjoined as unconstitutional.

I have covered this and related issues on my blog and in the Baltimore Sun. Take a look at the site below for news and analysis related to this and other civil-military culture issues.