A three-judge panel of the D.C. Circuit today rejected arguments in Electronic Privacy Information Center v. U.S. DHS that the Transportation Security Administration's use of advanced imaging technology (instead of magnetometers) violated the Fourth Amendment (and various federal statutes).  The court also ruled that the TSA failed to use notice-and-comment rulemaking in adopting the scanner; but the court declined to vacate the rule, opting instead to remand to the TSA for further proceedings.  (The court declined to say whether the TSA might invoke the Administrative Procedure Act's "good cause" exception to notice-and-comment rulemaking, so it's not clear that the agency will use notice-and-comment rulemaking.)   The ruling validates the TSA's use of body scanners at airports, but it also requires the TSA to take a second look at the issue--at least to determine whether use of the scanners meets the APA's good cause exception. 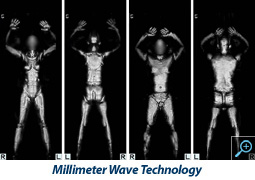 As to the Fourth Amendment, the court ruled that TSA airport screenings are "administrative searches," subject to a balancing test under the Fourth Amendment between the degree to which the screening intrudes upon an individual's privacy and the degree to which it's needed for a legitimate government interest.  Here's what the court said about that balance:

[It] clearly favors the Government here.  The need to search airline passengers "to ensure public safety can be particularly acute," and, crucially, an AIT scanner, unlike a magnetometer, is capable of detecting, and therefore of deterring, attempts to carry aboard airplanes explosives in liquid or powder form.  On the other side of the balance, we must acknowledge the steps the TSA has already taken to protect passenger privacy, in particular distorting the image created using AIT and deleting it as soon as the passenger has been cleared.  More telling, any passenger may opt-out of AIT screening in favor of a patdown, which allows him to decide which of the two options for detecting a concealed, nonmetallic weapon or explosive is least invasive.

[Image: Millimeter Wave Technology Image, from TSA: How it Works]

Listed below are links to weblogs that reference Court Upholds TSA's Use of Body Scanners:

For public policy reasons the DC Circuit Justices had to rule in favor of TSA. Use of the body scanners probably does violate the Fourt Amendment rights of individuals, but giving up individual rights is the price of vigilance.