Conference on the Constitutional Convention

Fix Congress First is hosting a Conference on the Constitutional Convention September 24 and 25, 2011, at Harvard University.  The Conference is co-chaired by Lawrence Lessig and Mark McKinnon; Lessig and McKinnon make their case for an Article V convention, and frame some of the issues for the Conference, here. 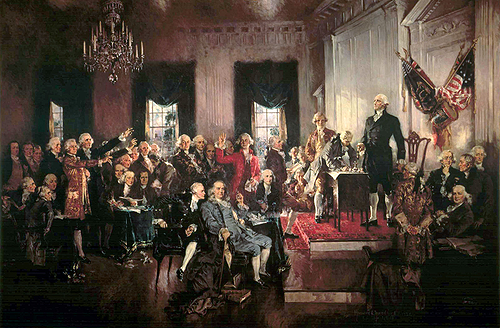 According to the Conference web-site:

On September 24th, people from across America and across the political spectrum will convene at Harvard University to discuss the advisability and feasibility of organizing towards a Constitutional Convention.  While the conference's lead organizers are proponents of a convention--and are particularly passionate about the need to reduce the influence of private money in politics--we actively encourage the participation of those who support a convention for other reasons, and those who oppose holding a convention at all.

[Image: Scene at the Signing of the Constitution of the United States, by Howard Chandler Christy, East Stairway, U.S. House of Representatives, U.S. Capitol Building.]

Listed below are links to weblogs that reference Conference on the Constitutional Convention:

The John Birch Society has been working to oppose a Con-Con since at least 1988. I contacted the organization hosting this event asking that it allow us to participate. No reply as of yet.