A three-judge panel of the D.C. Circuit ruled on Tuesday in Arkan v. Rumsfeld that former Secretary of Defense Donald Rumsfeld enjoyed qualified immunity against the plaintiffs' Bivens claims that he formulated and implemented policies of torture at Abu Ghraib and other military facilities in Iraq and Afghanistan in violation of their Fifth Amendment Due Process and Eighth Amendment rights.  The ruling follows the Circuit's earlier ruling in Rasul v. Myers (Rasul II) and together with that case makes it nearly impossible for an alien plaintiff to bring a constitutional claim against a government official for torture at an overseas facility.  (The case may be closer for torture at Guantanamo Bay, however.) 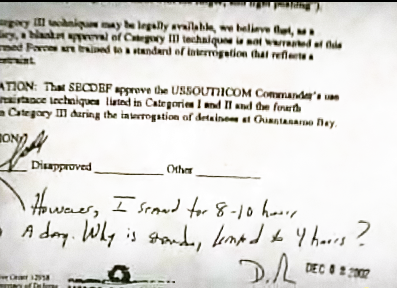 The panel ruled unanimously that it was not clearly established in 2004, the time of the actions, that the Fifth and Eighth Amendments applied to aliens detained abroad:

The panel here considered the former question first--whether it was clearly established at the time--and declined to rule on the other question.  The panel wrote that deciding whether the actions actually violated the Constitution would have been an academic exercise and potentially harmful to prevailing defendants, because it may prevent them from appealing.

The Supreme Court recently ruled in Camreta v. Greene that a defendant who gets qualified immunity because a right isn't clearly established can nevertheless appeal to the Supreme Court, which has statutory jurisdiction to take an appeal "of any party."  The Court didn't rule on whether a "prevailing" defendant can also appeal to a circuit court, but the panel here seemed to think not.  In any event, the panel here certainly could have ruled on whether Rumsfeld's actions actually violated the Constitution: Pearson allows it; and under Camreta, Rumsfeld clearly could have appealed that to the Supreme Court (assuaging the panel's concern about lack of appealability).  (A principal reason for a court to rule on whether an action actually violates the Constitution is to give officials guidance about their future behavior--what's constitutional, and what's not.)

The upshot is that we don't have a ruling on whether Rumsfeld's actions actually violated the Fifth and Eighth Amendments--and therefore no "declaratory" judgment one way or the other, and no guidance for officials in the future.

The panel also ruled that prudential considerations--that cases like this against military officials would disrupt the war effort--also counseled against a Bivens claim.  The analysis here was sparse, but it puts belts over the suspenders to ensure that no like cases move past a motion to dismiss.

(The panel split 2-1 on whether the plaintiffs could bring an Alien Tort Statute claim.  The majority said no: The ATS claim transforms into a Federal Tort Claims Act claim, because Rumsfeld's actions were "incidental to [his] legitimate employment duties."  Op. at 20.  As an FTCA claim, the plaintiffs had to exhaust administrative remedies.  They didn't, so the case is dismissed.  Judge Edwards, in a lengthy dissent disagreed.)

Listed below are links to weblogs that reference Torture Suit Against Rumsfeld Dismissed: