The Court's opinion today in Borough of Duryea v. Guarnieri involving the right to petition does little to change that. 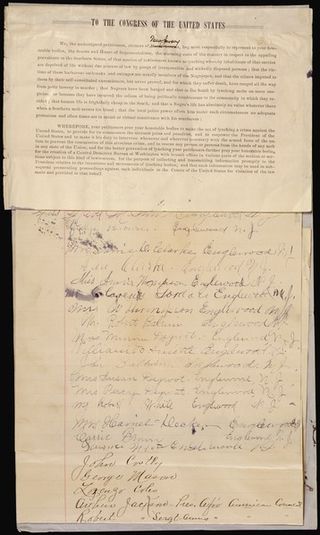 The opinion, authored by Justice Kennedy, does express some grand sentiments about the Petition Clause:  it traces its origins to the Magna Carta, 1215, which not only confirmed the right of barons to petition the King, but was King John's response to a petition.  The right to petition is a right "essential to freedom."  Yet ultimately, the Court subjugates the Petition Clause to the Speech Clause:

It is not necessary to say that the two Clauses are identical in their mandate or their purpose and effect to acknowledge that the rights of speech and petition sharesubstantial common ground. This Court has said that the right to speak and the right to petition are “cognate rights.”

At issue is whether a public employee who was dismissed for filing a union grievance was protected by the Petition Clause.  The Court reversed the Third Circuit and held that because the employee speech would fail the "matter of public concern" requirement under the Speech Clause, it similarly failed to make a claim under the Petition Clause:

The framework used to govern Speech Clause claims by public employees, when applied to the Petition Clause,will protect both the interests of the government and the First Amendment right. If a public employee petitions as an employee on a matter of purely private concern, the employee’s First Amendment interest must give way, as it does in speech cases.

Justice Scalia concurred and dissented, articulating two disagreements.  First, he found it "doubtful" that the Petition Clause includes a lawsuit.  Instead, he argues from an originalist stance that it includes only petitions directed at legislative and executive branches, even as he acknowledges that some scholars disagree.  Justice Thomas' separate concurrence also states that the original meaning of the Petitions Clause does not include lawsuits.

Second, "and of greater practical consequence" for Justice Scalia, he disagrees with "the Court’s decision to apply the “public concern” framework of Connick v. Myers, 461 U. S. 138 (1983), to retaliation claims brought under the Petition Clause."  He argues that the Court correctly holds that the Speech Clause and Petition Clause are not co-extensive, but then the Court goes on to treat them identically and to "shoehorn" the public concern doctrine into the Petition Clause.  For Scalia, this is especially misguided because "petitions to address private grievances were such a high proportion of petitions at the founding - - - a proportion that is infinitely higher if lawsuits are considered to be petitions—it is ahistorical to say that petitions on matters of public concern constitute 'core petitioning activity.' "

However, whether the opinion is ahistorical or not, the Petition Clause has certainly not been expanded in Borough of Duryea v. Guarnieri.

RR
[image: Petition from the citizens of NJ to Congress to criminalize lynching, 1900, via]

Listed below are links to weblogs that reference The Right to Petition: Borough of Duryea v. Guarnieri Opinion Analysis: