Right to Process, but No Absolute Right to Counsel in Civil Contempt Proceedings

The Supreme Court ruled on Monday in Turner v. Rogers that a father who owes back child support has no absolute right to counsel in a civil contempt proceeding, even when it results in his incarceration.  But the Court also ruled (5-4) that the procedures in this case--in which the father had no attorney and in which the civil contempt court did not use adequate safeguards for the father--violated the Fourteenth Amendment Due Process Clause.

The case is an addition to the Court's civil right-to-counsel jurisprudence and its procedural due process jurisprudence, but a narrow one.  The ruling goes to lengths to distinguish right to counsel in criminal cases (even criminal contempt) from right to counsel in civil cases (even when they may result in detention or incarceration, as here), underlining its holding that a poor civil litigant (unlike a poor criminal defendant) doesn't have an absolute right to counsel even when he or she faces detention or incarceration.  But at the same time, the Court made clear that state courts must use some reasonable safeguards, even if short of counsel, to protect the significant interest of a civil defendant in avoiding detention.  (A portion of the case reads like an instruction manual for state courts on these safeguards.)  And the Court was careful to point out that its ruling here applies only when the opposing party is an unrepresented private person, not the state itself (with its attorneys).  In short, the ruling means that state courts don't always have to appoint counsel for poor defendants in civil contempt proceedings that may result in detention, but that they do have to provide some meaningful safeguards to protect that defendant's significant interest in avoiding detention. 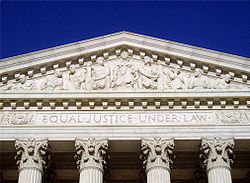 Justice Breyer, joined by Justices Kennedy, Ginsburg, Sotomayor, and Kagan, wrote that Petitioner Turner was not necessarily entitled to appointed counsel in his civil contempt proceeding for failure to pay child support, even when his civil contempt landed him in detention.  Justice Breyer applied the familiar procedural due process balancing test in Mathews v. Eldridge and held that while Turner's interest (avoiding detention) argues strongly in favor of appointed counsel, three considerations counter-balanced his interest.  First, the right procedures can ensure that the key question, a defendant's ability to pay child support (and therefore the defendant's civil contempt for not paying), is "sufficiently straightforward to warrant determination prior to providing a defendant with counsel . . . ."  Op. at 13.  Second, often the opposing party in civil contempt proceedings is also unrepresented by counsel (as was the case here); when this happens, the parties are equally situated, and appointed counsel would only lead to an asymmetry.  Finally, civil contempt courts can protect against an erroneous detention by using safeguards, like notice to the defendant that ability to pay is a key issue, a form to collect relevant financial information, an opportunity for the defendant to respond to questions about ability to pay, and "an express finding by the court that the defendant has the ability to pay."  Op. at 14.

The majority ruled that these safeguards weren't in place here, and so Turner's detention violated Due Process.  The Court remanded the case, suggesting that the state courts simply adopt the safeguards.

Justice Thomas, joined by Chief Justice Roberts and Justices Scalia and Alito, dissented.  Justice Thomas argued that the Fourteenth Amendment does not provide a right to appointed counsel for poor defendants facing incarceration in civil contempt proceedings.  Justice Thomas wrote that neither the original understanding nor the Court's recent jurisprudence supported a right to counsel in civil contempt proceedings.  (The portion of Justice Thomas's opinion on original understanding included this: "Moreover, as originally understood, the Sixth Amendment guaranteed only the 'right to employ counsel, or to use volunteered services of counsel'; it did not require the court to appoint counsel in any circumstance."  Op. at 2 (citing Justice Scalia's dissent in Padilla v. Kentucky). Chief Justice Roberts and Justice Alito did not join the portion of Justice Thomas's opinion on original understanding.)  Justice Thomas also wrote that the adequacy of the procedures (and the safeguards) came up late and were outside the question presented (which was limited to the right-to-counsel issue).

Listed below are links to weblogs that reference Right to Process, but No Absolute Right to Counsel in Civil Contempt Proceedings: