Georgia's House Bill 87, the "Illegal Immigration Reform and Enforcement Act of 2011" is similar to efforts by other states to control immigration, including the Indiana statute enjoined a few days ago and most notably Arizona.

A motion for preliminary injunction sought relief on three sections of the statute scheduled to take effect on July 1, 2011, but a federal judge has enjoined its enforcement in a 45 page opinion (and additional appendix).

The plaintiffs contended that HB87 violates the Fourth Amendment, the Fourteenth Amendment's due process and equal protection clause, and Article IV privileges and immunities clause right to travel.  The district judge rejected all of these arguments, as well as rejecting the State's argument that the individual and organizational plaintiffs lacked standing.

However, the district judge found favor with the arguments that the provisions of HB87 under consideration were preempted by federal law and therefore violative of the Supremacy Clause.

Section 8 of HB 87 authorizes local law enforcement officers to investigate a suspect’s illegal immigration status and, if the officer determines the suspect has violated federal immigration law, detain and arrest the suspect without a warrant. The judge stated: "Congress, however, has already addressed the circumstances in which local law enforcement personnel may enforce federal civil immigration law" in statutes that "clearly express Congressional intent that the Attorney General should designate state and local agents authorized to enforce immigration law."  Indeed, the district judge noted, "Congress has provided that local officers may enforce civil immigration offenses only where the Attorney General has entered into a written agreement with a state," or "where the Attorney General has expressly authorized local officers in the event of a mass influx of aliens."

Section 7 of HB87 creates three criminal violations: (1) transporting or moving an illegal alien in a motor vehicle; (2) concealing, harboring or shielding an illegal alien from detection;  and (3) inducing, enticing, or assisting an illegal alien to enter Georgia.  The judge distinguishes Chamber of Commerce v. Whiting, decided by the United States Supreme Court in May, in which the Court held that federal law did not preempt an Arizona statute providing for suspension and revocation of business licenses for entities employing unauthorized aliens. Unlike in Whiting, the judge found that the state and federal provisions were not parallel: the state law prohibits knowingly inducing, enticing or assisting illegal aliens to enter Georgia.  The federal law's corresponding “inducement” provision prohibits inducing an alien to “come to, enter, or reside in the United States.” "Once in the United States, it is not a federal crime to induce an illegal alien to enter Georgia from another state."  Moreover, the judge reasoned that the Arizona statute in Whiting "imposed licensing laws specifically authorized by a statutory savings clause, HB87 imposes additional criminal laws on top of a comprehensive federal scheme that includes no such carve out for state regulation."

The judge therefore found both sections 7 and 8 to be sufficiently constitutionally suspect to support a preliminary injunction.

The judge also had some observations on Georgia's articulated necessity for regulating immigration:

The widespread belief that the federal government is doing nothing about illegal immigration is the belief in a myth. Although the Defendants characterize federal enforcement as “passive,” that assertion has no basis in fact. On an average day, Immigration and Customs Enforcement officers arrest approximately 816 aliens for administrative immigration violations and remove approximately 912 aliens, including 456 criminal aliens, from the United States. (Declaration of Daniel H. Ragsdale ¶ 5) (Attached for convenience as Appendix B). In 2010, immigration offenses were prosecuted in federal court more than any other offense. U.S. SENTENCING COMMISSION–2010SOURCEBOOK OF FEDERAL SENTENCING STATISTICS 11-12 (2010).  Of the 83,946 cases prosecuted under the federal sentencing guidelines, 28,504, or 34% involved immigration offenses. Id. In 2010, of 81,304 criminal cases prosecuted in federal court, 38,619 (47.5%) were non-United States citizens. It is true that there are thousands of illegal immigrants in Georgia that are here because of the insatiable demand in decades gone by for cheap labor in agriculture and certain industries such as construction and poultry processing. The federal government gives priority to prosecuting and removing illegal immigrants that are committing crimes in this country and to those who have previously been deported for serious criminal offenses such as drug trafficking and crimes of violence. (Declaration of Daniel H. Ragsdale ¶¶ 16-28.) To the extent that federal officers and prosecutors have priorities that differ from those of local prosecutors, those priorities are part of the flexibility that “is a critical component of the statutory and regulatory framework” under which the federal government pursues the difficult (and often competing) objectives, of “protecting national security, protecting public safety, and securing the border.” 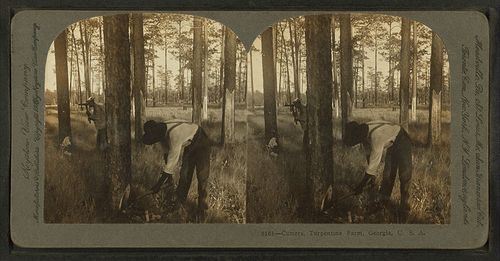 The federal district judge is Thomas Thrash formerly a LawProf at Georgia State.  The case is sure to be appealed to the Eleventh Circuit.

RR
[image: Cutters at Turpentine Farm in Georgia via]