Is The Roberts Court Really a Court? Eric Segall's Answer

In an article with the provocative title Is The Roberts Court Really a Court?, 40 Stetson Law Review 1 (2011), available on ssrn, Professor Eric Segall defines the judicial function as the resolution of "legal disputes by examining prior positive law, such as text and precedent, and then providing transparent explanations" for the decisions.  On this definotion, Segall concludes that the Roberts Court is not "really" a judicial body based upon an examination of three controversial cases:  Gonzales v. Carhart (Carhart II), 550 U.S. 124 (2007); District of Columbia v. Heller, 554 U.S. 570 (2008); and Citizens United v. Federal Election Commission, __ U.S. ___, 130 S. Ct. 876 (2010).

In Carhart II, the Roberts Court implicitly overturned an important decision without any discussion of stare decisis. In Heller, the Court created a brand new constitutional right, displacing centuries of caselaw, based on a controversial (at best) historical account that raised serious questions about how the Court actually reached its decision. And, in Citizens United, the Court reached out to decide an important and settled issue of constitutional law not raised by the parties, and it did so without any meaningful discussion of history or stare decisis concerns. In all three cases, the only persuasive descriptive account of why the Court veered from prior positive law is that the people on the Court changed (Justice Alito for Justice O’Connor). This is not judging according to the Rule of Law but judging according to the Rule of Five Justices, and it seriously calls into question whether the Roberts “Court” is, in fact, a court at all.

Segall's brief article provides execellent support for this conclusion, which is widely - - - although certainly not universally - - - shared. 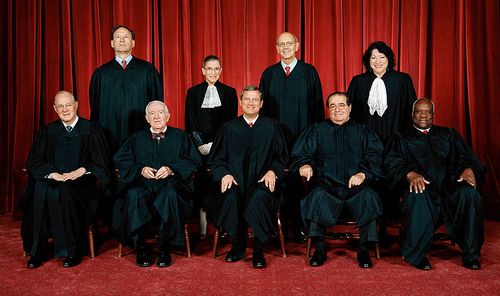 However, Segall also contends that the question of whether the Roberts Court is really a court "could just as easily be asked of the Rehnquist, Burger, and Warren Courts, as well as all of the other previous Supreme Courts."  Indeed, the conclusion that the Supreme Court is merely the "Rule of Five" is one that might even be more widely - - - although again not universally - - - shared than conclusions about any particular Court.  It is what can make Constitutional Law courses so challenging.

Segall quickly retreats from the more comprehensive argument: "A comparative analysis of the various Supreme Courts’ reliance on prior law is well beyond the scope of this Article."   Yet he contends that regardless "of whether prior Courts can be accused of similar attitudes, the general indifference of the Roberts Court to these rule-of-law values is troubling."   With three controversial cases, Segall mounts an argument that many will find persuasive.

Listed below are links to weblogs that reference Is The Roberts Court Really a Court? Eric Segall's Answer:

Persuasive? Hardly. First, that definition of court is ridiculously suspect. And even assuming that premise as true, his conclusions are wrong:

- Corporations have been "persons" for the purposes of the 14th Amendment since near the time of its enactment.
- No controlling precedent really existed regarding the 2nd Amendment, and the text, while arguably ambiguous, did not in anyway merit interpretation against finding an individual right (in fact, that's quite an absurd canon to follow).
- Casey itself overruled all but the central tenet of Roe, and though I haven't given Gonzalez more than a cursory look, it doesn't appear to disturb that central tenet (indeed, Casey actually found a new governmental interest from conception, something that smacks of a Catholic wedding vow if you ask me).

Second, his qualified admission that the Roberts court doesn't relieve him of responsibility — it's hackery. There's no bigger culprit of "indifference" to the "rule-of-law" than the post-1937 New Deal court. He might say that's OK because it was the right result (or, at the very least, it was logically coherent) — and that would be fine. But then this would be an article about how the Roberts court got it wrong, not an article about how this court is particularly horrible because it ignores precedent.

Now I'm not a big fan of Gonzalez v. Carhart (in fact I'm not a fan of the Court's tacit endorsement of these states' suspect claimed interests in fetuses as potential lives, extending all the way back to Roe, in the first place). I'm not a fan of Comstock or Gonzalez v. Raich — there's a lot I'm not a fan of from the Roberts court. But I'm also not intellectually dishonest. You can't call a court a bunch of partisan hacks and get away with partisan hackery yourself. The article belongs on the opinion page of a newspaper, not in a law review.