In a 5-4 decision today in Brown v. Plata, the United States Supreme Court affirmed the order of a three-judge federal court requiring California prisons to remedy prison overcrowding to comply with the Eigth Amendment. 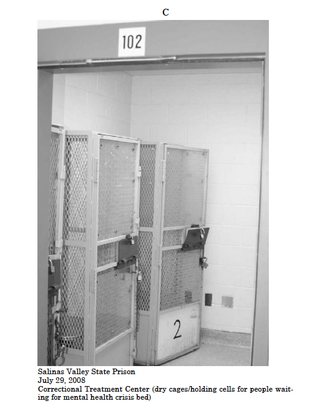 As was apparent from the contentious oral argument in the case (then Schwarzenegger v. Plata), the ultimate division amongst the Justices was whether to privilege the overcrowded conditions (and the resultant mental and other health problems of prisoners) or to privilege the possible public safety ramifications caused by the release of prisoners to ease the overcrowing.  However, many issues regarding the authority of the three-judge court and the findings of fact also occupied the oral argument.

Writing for the Court, Justice Kennedy's opinion is short on rhetoric and long on details and close reasoning.  He does, however, devote substantial space to the conditions of confinement, including in the three photos in the Court's Appendix (as in photo left) and as in this passage:

After one prisoner was assaulted in a crowded gymnasium, prison staff did not even learn of the injury until the prisoner had been dead for several hours. Tr. 382. Living in crowded, unsafe, and unsanitary conditions can cause prisoners with latent mental illnesses to worsen and develop overt symptoms. Crowding may also impede efforts to improve delivery of care. Two prisoners committed suicide by hanging afterbeing placed in cells that had been identified as requiringa simple fix to remove attachment points that could sup-port a noose. The repair was not made because doing sowould involve removing prisoners from the cells, and there was no place to put them. Id. at 769–777. More generally, Jeanne Woodford, the former acting secretary of California’s prisons, testified that there “‘are simply too many issues that arise from such a large number of pris-oners,’” and that, as a result, “‘management spends virtu-ally all of its time fighting fires instead of engaging inthoughtful decision-making and planning’” of the sort needed to fashion an effective remedy for these constitu-tional violations. Juris. App. 82a.

Opinion at 23.  Yet, the Court acknowledged that as "this case illustrates, constitutional violations in conditions of confinement are rarely susceptible of simpleor straightforward solutions. In addition to overcrowding the failure of California’s prisons to provide adequate medical and mental health care may be ascribed to chronic and worsening budget shortfalls, a lack of political will in favor of reform, inadequate facilities, and systemic administrative failures." (Opinion at 28).  The Court upheld the order of the three-judge court to reduce prison the prison population to 137.5% of capacity finding it not to be overbroad or otherwise unauthorized.

Buried within a paragraph regarding the State's ability to move for modification from the three-judge court is the Court's observation that at this time, "the State has not proposed any realistic alternative to the order." Opinion at 36.  In other words, there is a "constitutional wrong" and it must be remedied.

The Court also reviewed the remedy under a provision of the Prison Litigation Reform Act, PLRA, 18 U. S. C. §3626(a), that requires a remedy to be “narrowly tailored” to the constitutional violation and that gives “substantial weight” to public safety.   As the Court concluded:

The medical and mental health care provided by California’s prisons falls below the standard of decency that inheres in the Eighth Amendment. This extensive and ongoing constitutional violation requiresa remedy, and a remedy will not be achieved without a reduction in overcrowding. The relief ordered by the three-judge court is required by the Constitution and was authorized by Congress in the PLRA. The State shall implement the order without further delay.

Dissenting, Justice Scalia joined by Justice Thomas, labels the remedy by the three judge court "perhaps perhaps the most radical injunction issued by a court in our Nation’s history," based upon proceedings that were a "judicial travesty" and a result which "takes federal courts wildly beyond their institutional capacity."   In less colorful language, Justice Alito's dissent, joined by Chief Justice Roberts, criticizes the decree of the three judge court as "a perfect example of what the Prison Litigation Reform Act of 1995 (PLRA), 110 Stat. 1321–66, was enacted to prevent," and adds that

The Constitution does not give federal judges the au-thority to run state penal systems. Decisions regardingstate prisons have profound public safety and financial implications, and the States are generally free to makethese decisions as they choose.

Alito also predicts dire consequences, as he did during the oral argument, closing his dissenting opinion with his fear that the decision "will lead to a grim roster of victims. I hope that I am wrong.In a few years, we will see."

Listed below are links to weblogs that reference Court Affirms Reduction in Prison Overcrowding in California: Brown v. Plata Opinion :

The prisons are overcrowded simply because there are a lot of people in them that do not need to be there. We are a nation of people who have just decided to throw people in jail, instead providing a better path at the high cost of $50,000 a year each. Now the opposition wants to build more prisons for billions more. Prisons should be reserved for those who are a threat to public safety for as long as that threat exists. It is simply punishment, nothing more. In addition our judicial system is unfairly bias against the under the privileged and minorities; holding these goups longer than they need to be held when they are guilty and convicting them at a higher rate when they are innocent.

It is my opinion that many prisoners may safely be released and the people who run the prisons have a pretty good idea who they are, as they agree that 37,000 of them can be released without causing a threat to public safetly. There are probably even more than that number.