While the Ninth Circuit's opinion, as we previously noted, read like an excellent discussion of the doctrine, the Court's opinion is less clear and certainly more fractured:

ROBERTS, C. J., delivered the opinion of the Court, except as to PartsII–B and III–B. SCALIA, KENNEDY, and ALITO, JJ., joined that opinion in full, and THOMAS, J., joined as to Parts I, II–A, and III–A and concurred in the judgment. BREYER, J., filed a dissenting opinion, in which GINSBURG, J., joined. SOTOMAYOR, J., filed a dissenting opinion. KAGAN, J., took no part in the consideration or decision of the case.

Importantly, Justice Kennedy seemed to have resolved his reservations expressed during oral argument about the position of Arizona in light of Justice Breyer's questions: Kennedy joined the opinion of CJ Roberts and not Justice Breyer's dissent. 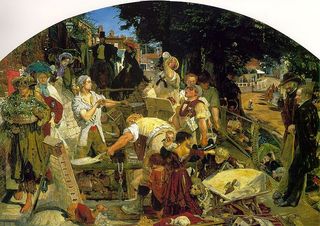 The Court began with its conclusion "that the State’s licensing provisions fall squarely within the federal statute’s savings clause and that the Arizona regulation does not otherwise conflict with federal law" and therefore held that the Arizona law is not preempted.

After extensively explaining the federal immigration regulatory regime and the Arizona statute, the Court turns to the vital definition of "license."   The case pivots on the meaning of license because the Immigration Reform and Control Act of 1986 (IRCA), expressly pre-empts States from “imposing civil or criminal sanctions (other than through licensing and similar laws) upon those who employ, or recruit or refer for a fee for employment, unauthorized aliens."

"Licensing" turns out to be an ambiguous term, although during oral argument Kennedy admited he initially thought, "Oh, well, licensing, that is a defined term; I will look in Corpus Juris Secundum or ALR or something," a sentiment echoed throughout the arguments.  Roberts and Alito seemed more certain than Kennedy that "licensing" was a clear and rather broad term that granted the state wide latitude, and indeed Roberts opinion for the Court quotes  Webster’s Third New International Dictionary.  The Court then notes:

The Chamber and the United States as amicus argue that the Arizona law is not a “licensing” law because itoperates only to suspend and revoke licenses rather than to grant them. Again, this construction of the term runscontrary to the definition that Congress itself has codified.See 5 U. S. C. §551(9) (“‘licensing’ includes agency process respecting the grant, renewal, denial, revocation, suspension, annulment, withdrawal, limitation, amendment, modification, or conditioning of a license” (emphasis added)). It is also contrary to common sense. There is no basis in law, fact, or logic for deeming a law that grantslicenses a licensing law, but a law that suspends or revokes those very licenses something else altogether.

On the issue of mandating employers to use the E-verify system to determine authorization to work, the Court rejected the Chamber of Commerce's argument that the Arizona requirement was impliedly preempted, noting that the federal government has encouraged participation in the system and that it is reliable.

Justice Breyer's lengthy dissenting opinion, joined by Justice Ginsburg, and Justice Sotomayor's separate dissenting opinion fundamentally disagree that the Arizona statute is a licensing law.  Breyer would "read the words “licensing and similar laws” as covering state licensing systems applicable primarily to the licensing of firms in the business of recruit-ing or referring workers for employment, such as the state agricultural labor contractor licensing schemes in exis-tence when the federal Act was created."  Justice Sotomayor emphasizes the statutory scheme and ultimately concludes:

the [federal] statutory scheme as a whole defeats Arizona’s and the majority’s reading of the saving clause.Congress would not sensibly have permitted States todetermine for themselves whether a person has employedan unauthorized alien, while at the same time creating aspecialized federal procedure for making such a determination, withholding from the States the information necessary to make such a determination, and precluding useof the I–9 forms in nonfederal proceedings.

Although Chamber of Commerce v. Whiting does not involve Arizona's  SB1070, the litigation is seen as having implications for the more notorious law.  However, it is distinct from SB 1070 in several important respects, including the fact that both the district judge and the Ninth Circuit found the Arizona statute at issue in Whiting to be constitutional.