In its opinion issued today in United States v. Arizona, a panel of the Ninth Circuit affirmed the district court's preliminary injunction against the enforcement of four sections of the Arizona immigration statute passed a year ago and commonly known as SB 1070.  The Ninth Circuit held that the US had a likelihood of success on its federal preemption argument against these four sections based on the federal government's claim of preemption under the Supremacy Clause, Article VI. 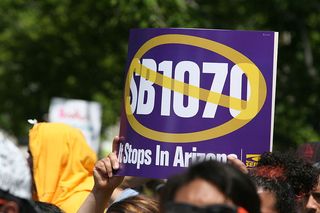 In the panel opinion, Judge Paez set out the applicable standards before turning to each section.  The discussions in each section, however, also analyzed different standards and facets of the complexity that is preemption doctrine.

As to section 2(B), Judge Paez rejected Arizona's argument that state law enforcement officers are only required to verify the immigration status of an arrested person before release if reasonable suspicion exists that the person lacks proper documentation:

On its face, the text does not support Arizona’s reading of Section 2(B). The second sentence is unambiguous: “Any person who is arrested shall have the person’s immigration status
determined before the person is released.” Ariz. Rev. Stat. Ann. § 11-1051(B) (2010) (emphasis added). The all encompassing “any person,” the mandatory “shall,” and the definite “determined,” make this provision incompatible with the first sentence’s qualified “reasonable attempt . . . when practicable,” and qualified “reasonable suspicion.”

This - as well as other language in the statute - conflicted with INA, the federal law: "8 U.S.C. § 1357(g) demonstrates that Congress intended for state officers to systematically aid in immigration enforcement only under the close supervision of the Attorney General."

As to section 3, Judge Paez found that Arizona's state criminal provision that "a person is guilty of willful failure to complete or carry an alien registration document if the person is in violation" of federal law, is not authorized by federal statutes and "plainly stands in opposition to the Supreme Court's direction" regarding field preemption.

Section 5(c), the "work" provision which makes criminal an "unauthorized alien" knowingly applying for work soliciting work in a public place, or performing work, Judge Paez stressed the Congressional rejection of work penalties in the INA, as well as Ninth Circuit precedent on this issue, and concluded that federal law "likely preempts SB1070 Section 5(C) since the state law conflicts" with Congressional intent.

Finally, in addressing Section 6 which provides that a "peace officer, without a warrant, may arrest a person if the officer has probable cause to believe"  that the "person to be arrested has committed any public offense that makes the person removable from the United States," Judge Paez found that states do not have inherent authority to enforce the civil provisions of federal immigration law.  Moreover, this section "interferes with the federal government's prerogative to make removability determinations and set priorities."

Concurring, Judge Noonan wrote separately "to emphasize the intent of the statute and its compatibility with federal foreign policy."

Judge Bea concurred as to Sections 3 and 5(C), but dissenting as to the other two sections, stressing that the enforcement mechanisms and the necessity of considering Congressional - - - and not Executive - - - intent.

Listed below are links to weblogs that reference Ninth Circuit Upholds Injunction Against Arizona SB1070: