Footnote of the Day: The Opera Skirmish and a Taxonomy

In her dissenting opinion in Minnesota v. Carter, 525 U.S. 83 (1998), deciding the extent of the Fourth Amendment protection to guests in the home,  Justice Ginsburg includes the following footnote:

Justice SCALIA's lively concurring opinion deplores our adherence to Katz. In suggesting that we have elevated Justice Harlan's concurring opinion in Katz to first place, see ante, at 477, Justice SCALIA undervalues the clear opinion of the Court that “the Fourth Amendment protects people, not places,” 389 U.S., at 351, 88 S.Ct. 507. That core understanding is the leitmotif of Justice Harlan's concurring opinion. One cannot avoid a strong sense of déjà vu on reading Justice SCALIA's elaboration. It so vividly recalls the opinion of Justice Black in dissent in Katz. See 389 U.S., at 365, 88 S.Ct. 507 (Black, J., dissenting) (“While I realize that an argument based on the meaning of words lacks the scope, and no doubt the appeal, of broad policy discussions and philosophical discourses ..., for me the language of the Amendment is the crucial place to look.”); id., at 373, 88 S.Ct. 507 (“[B]y arbitrarily substituting the Court's language ... for the Constitution's language ... the Court has made the Fourth Amendment its vehicle for holding all laws violative of the Constitution which offend the Court's broadest concept of privacy.”); ibid. (“I will not distort the words of the Amendment in order to ‘keep the Constitution up to date’ or ‘to bring it into harmony with the times.’ ”). Justice SCALIA relies on what he deems “clear text,” ante, at 477, to argue that the Fourth Amendment protects people from searches only in the places where they live, ante, at 476. Again, as Justice Stewart emphasized in the majority opinion in Katz, which stare decisis and reason require us to follow, “the Fourth Amendment protects people, not places.” 389 U.S., at 351, 88 S.Ct. 507. 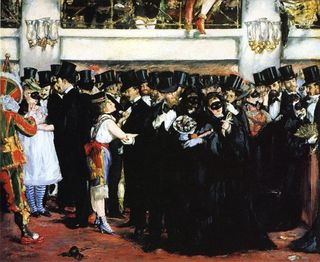 While this footnote may not seem especially unusual, Professor Jay Wexler reports that it was part of what he came to think of as the footnote skirmish between Justice Ginsburg, for whom he was clerking, and Justice Scalia, both of whom are opera fans and would have particular reactions to the word "leitmotif."  In the responsive footnote in his concurring opinion, Scalia retorts:

In saying this, I do not, as the dissent claims, clash with “the leitmotif of Justice Harlan's concurring opinion” in Katz, post, at 484, n. 3; au contraire (or, to be more Wagnerian, im Gegenteil ), in this regard I am entirely in harmony with that opinion, and it is the dissent that sings from another opera.

Wexler reports that there may have been talk of an escalation of the opera references, but that this did not come to pass.

Wexler's article, Justice Ginsburg's Footnotes, 43 New Eng. L. Rev. 857 (2009), draft available on ssrn, not only contains his remembrance of this incident, but also has a useful taxonomy of footnotes.  He then organizes Ginsburg's footnotes accordingly: 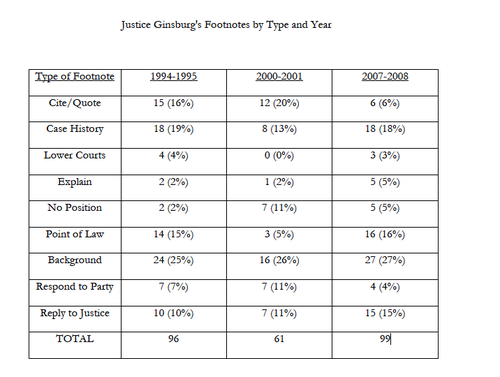 Wexler's taxonomy is a useful one for thinking about - - - and teaching - - - cases in which there are footnotes, which now seem to be all cases.

Listed below are links to weblogs that reference Footnote of the Day: The Opera Skirmish and a Taxonomy: