Footnote of the Day: The Experience and History of Inequality

On the anniversary of the 1968 assassination of Martin Luther King, footnote 24 of Justice Thurgood Marshall’s concurring and dissenting opinion in Cleburne v. Cleburne Living Center, Inc., 473 U.S. 432 (1985) is appropriate.  Marshall's footnote is condensation of equal protection theory and an argument for judicial consideration of history and experience.  It is also an illumination of footnote 4 of Carolene Products.  Marshall (pictured) wrote: 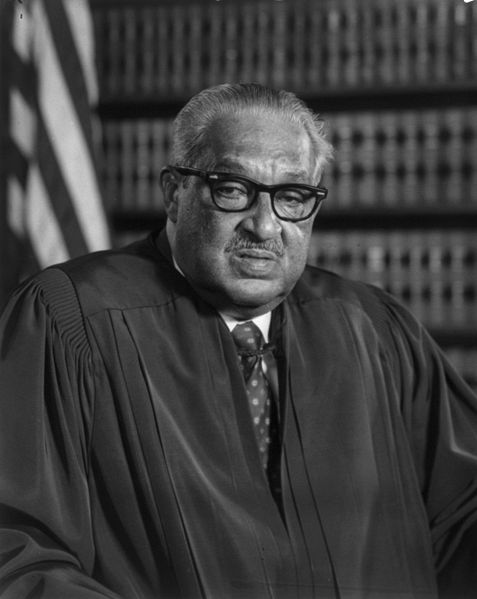 No single talisman can define those groups likely to be the target of classifications offensive to the Fourteenth Amendment and therefore warranting heightened or strict scrutiny; experience, not abstract logic, must be the primary guide. The "political powerlessness" of a group may be relevant, San Antonio Independent School District v. Rodriguez, 411 U.S. 1, 28 (1973), but that factor is neither necessary, as the gender cases demonstrate, nor sufficient, as the example of minors illustrates. Minors cannot vote and thus might be considered politically powerless to an extreme degree. Nonetheless, we see few statutes reflecting prejudice or indifference to minors, and I am not aware of any suggestion that legislation affecting them be viewed with the suspicion of heightened scrutiny. Similarly, immutability of the trait at issue may be relevant, but many immutable characteristics, such as height or blindness, are valid bases of governmental action and classifications under a variety of circumstances. See ante, at 442-443, n. 10. The political powerlessness of a group and the immutability of its defining trait are relevant insofar as they point to a social and cultural isolation that gives the majority little reason to respect or be concerned with that group's interests and needs. Statutes discriminating against the young have not been common nor need be feared because those who do vote and legislate were once themselves young, typically have children of their own, and certainly interact regularly with minors. Their social integration means that minors, unlike discrete and insular minorities, tend to be treated in legislative arenas with full concern and respect, despite their formal and complete exclusion from the electoral process. The discreteness and insularity warranting a "more searching judicial inquiry," United States v. Carolene Products Co., 304 U.S. 144, 153 , n. 4 (1938), must therefore be viewed from a social and cultural perspective as well as a political one. To this task judges are well suited, for the lessons of history and experience are surely the best guide as to when, and with respect to what interests, society is likely to stigmatize individuals as members of an inferior caste or view them as not belonging to the community. Because prejudice spawns prejudice, and stereotypes produce limitations that confirm the stereotype on which they are based, a history of unequal treatment requires sensitivity to the prospect that its vestiges endure. In separating those groups that are discrete and insular from those that are not, as in many important legal distinctions, "a page of history is worth a volume of logic." New York Trust Co. v. Eisner, 256 U.S. 345, 349 (1921) (Holmes, J.)

Marshall's discussion of the social integration of minors and the lack of prejudice against the young might be worth further discussion.

Listed below are links to weblogs that reference Footnote of the Day: The Experience and History of Inequality: