Footnote of the Day: Separation of Powers and Military Commissions in Hamdan

Whether or not the President has independent power, absent congressional authorization, to convene military commissions, he may not disregard limitations that Congress has, in proper exercise of its own war powers, placed on his powers. See Youngstown Sheet & Tube Co. v. Sawyer, 343 U. S. 579, 637 (1952) (Jackson, J., concurring). The Government does not argue otherwise.

In his article, Congress, the Commander-In-Chief, and the Separation of Powers After Hamdan,  16 Transnational Law & Contemporary Problems 933 (2007), draft available on ssrn, Professor Stephen Vladeck argues - - - in a footnote - - - that "To say that “[t]he Government does not argue otherwise” is entirely misleading, for the government’s entire theory of the case was that the UCMJ procedures were not exhaustive."  Id. at 959 n. 141.

Vladeck later expands on the relevance of the footnote in Hamdan and its relationship to the famous concurrence of Justice Robert Jackson (pictured right) in Youngstown: 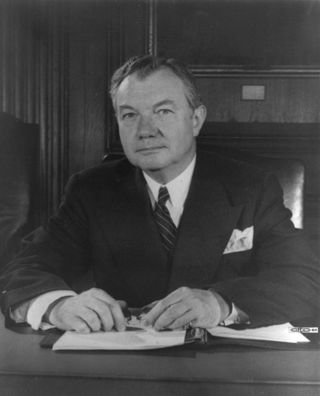 In the crucial footnote 23, the only part of the majority opinion where Justice Stevens even attempted to recognize the existence of a significant constitutional question in Hamdan, the sole citation is to Justice Jackson’s Youngstown concurrence, and to page 637—where Jackson outlines all of the second category and the beginnings of the third. It is an odd choice, though, given that even in category three cases, where the President’s power was to be at its “lowest ebb,” there remained a residual question about “disabling” Congress, the very question raised by the Commander-in-Chief override.

Indeed, through the lens of Justice Jackson’s Youngstown concurrence, the logic of Hamdan grows only more obfuscated. Was the majority  disavowing any and all claims to inherent executive power in the field of trying enemy combatants by military commission? If so, was it overruling a series of cases upholding such tribunals even where congressional authorization was questionable?  Was it reading the UCMJ as manifesting clear (and valid) congressional intent to oust independent executive regulation? Suffice it to say, if Justice Stevens meant to decide Hamdan on the strength of Justice Jackson’s Youngstown concurrence, he skipped a few steps, for he did not even attempt to undertake the question (to which Jackson had devoted over a dozen pages) of whether the President’s inherent constitutional authority might trump congressional restrictions in such a case.

Listed below are links to weblogs that reference Footnote of the Day: Separation of Powers and Military Commissions in Hamdan: