Footnote of the Day: Plurality Footnote on Habeas for State Prisoners

Article I, section 9, of the United States Constitution provides that "The privilege of the Writ of Habeas Corpus shall not be suspended, unless when in Cases of Rebellion or Invasion the public Safety may require it."  However, Congress has often restricted habeas corpus, especially for state prisoners.  In 1996, Congress enacted the Antiterrorism and Effective Death Penalty Act, (AEDPA), placing a new restriction on the power of federal courts to grant writs of habeas corpus to state prisoners. In 28 U.S.C. § 2254(d)(1) Congress prohibited a federal court from granting an application for a writ of habeas corpus with respect to a claim adjudicated on the merits in state court unless that adjudication "resulted in a decision that was contrary to, or involved an unreasonable application of, clearly established Federal law, as determined by the Supreme Court of the United States.''

In Williams v. Taylor, 529 U.S. 362 (2000), the Court considered an ineffective assistance of counsel claim under Strickland v. Washington in the penalty phase of a capital case tried in Virginia.  The trial court granted the state post-conviction relief, the state Supreme Court reversed, and in subsequent federal habeas proceeding, the district judge granted habeas relief and the Fourth Circuit reversed.

With such a history, it is perhaps no surprise that the United States Supreme Court opinions were fractured.  Justice Stevens delivered the Opinion for the Court, except for Part II of his Opinion. 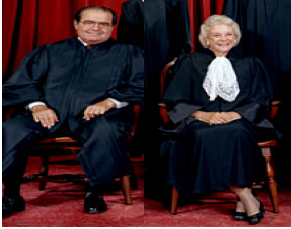 Justice O'Connor delivered the Opinion of the Court in Part II, except for "the footnote," with which Justice Scalia disagreed.  The cause of the disagreement between Justices Scalia and O'Connor seems a bit anticlimactic:

The legislative history of § 2254(d)(1) also supports this interpretation. See, e.g., 142 Cong. Rec. 7799 (1996) (remarks of Sen. Specter) (``[U]nder the bill deference will be owed to State courts' decisions on the application of Federal law to the facts. Unless it is unreasonable, a State court's decision applying the law to the facts will be upheld''); 141 Cong. Rec. 14666 (1995) (remarks of Sen. Hatch) (``[W]e allow a Federal court to overturn a State court decision only if it is contrary to clearly established Federal law or if it involves an `unreasonable application' of clearly established Federal law to the facts'').

The "interpretation" being supported is "Indeed, we used the almost identical phrase ``application of law'' to describe a state court's application of law to fact in the certiorari question we posed to the parties in Wright [v. West, 505 U.S. 277(1992)]."*

While this may not seem worthy of a disagreement, this is not the first time Justices Scalia and O'Connor could not reach an accord over a footnote.  In the next segment of "footnote of the day,"  April 17, a more substantive disagreement between the Justices.

Listed below are links to weblogs that reference Footnote of the Day: Plurality Footnote on Habeas for State Prisoners: