Footnote of the Day: Not Worth a Footnote?

The sole footnote in Justice Scalia's opinion concurring in part and concurring in the judgment of Webster v. Reproductive Health Services, 492 U.S. 490 (1989) may not be worthwhile, at least according to Scalia's own assessment within the footnote.  Continuing with our theme of the footnotes for Saturday and Sunday, it involves a disagreement between Justices Scalia and O'Connor. 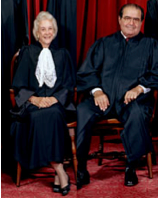 In the text of his opinion in Webster, Scalia wrote that "It was an arguable question today whether [the section] of the Missouri law contravened this Court's understanding of Roe v. Wade, * and I would have examined Roe rather than examining the contravention."

Here is the * footnote:

That question, compared with the question whether we should reconsider and reverse Roe, is hardly worth a footnote, but I think Justice O'Connor answers that incorrectly as well. In Roe v. Wade, 410 U.S. 113, 165-166 (1973), we said that "the physician [has the right] to administer medical treatment according to his professional judgment up to the points where important state interests provide compelling justifications for intervention." We have subsequently made clear that it is also a matter of medical judgment when viability (one of those points) is reached. "The time when viability is achieved may vary with each pregnancy, and the determination of whether a particular fetus is viable is, and must be, a matter for the judgment of the responsible attending physician." Planned Parenthood of Central Mo. v. Danforth, 428 U.S. 52, 64 (1976). Section 188.029 conflicts with the purpose and hence the fair import of this principle because it will sometimes require a physician to perform tests that he would not otherwise have performed to determine whether a fetus is viable. It is therefore a legislative imposition on the judgment of the physician, and one that increases the cost of an abortion.

Justice O'Connor would nevertheless uphold the law because it "does not impose an undue burden on a woman's abortion decision." Ante, at 530. This conclusion is supported by the observation that the required tests impose only a marginal cost on the abortion procedure, far less of an increase than the cost-doubling hospitalization requirement invalidated in Akron v. Akron Center for Reproductive Health, Inc., 462 U.S. 416 (1983). See ante, at 530-531. The fact that the challenged regulation is less costly than what we struck down in Akron tells us only that we cannot decide the present case on the basis of that earlier decision. It does not tell us whether the present requirement is an "undue burden," and I know of no basis for determining that this particular burden (or any other for that matter) is "due." One could with equal justification conclude that it is not. To avoid the question of Roe v. Wade's validity, with the attendant costs that this will have for the Court and for the principles of self-governance, on the basis of a standard that offers "no guide but the Court's own discretion," Baldwin v. Missouri, 281 U.S. 586, 595 (1930) (Holmes, J., dissenting), merely adds to the irrationality of what we do today.

Similarly irrational is the new concept that Justice O'Connor introduces into the law in order to achieve her result, the notion of a State's "interest in potential life when viability is possible." Ante, at 528. Since "viability" means the mere possibility (not the certainty) of survivability outside the womb, "possible viability" must mean the possibility of a possibility of survivability outside the womb. Perhaps our next opinion will expand the third trimester into the second even further, by approving state action designed to take account of "the chance of possible viability."

Listed below are links to weblogs that reference Footnote of the Day: Not Worth a Footnote?: