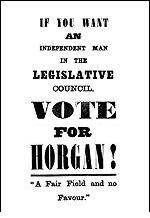 in the context of campaign financing:

This construction would restrict the application of § 608(e)(1) to communications containing express words of advocacy of election or defeat, such as "vote for," "elect," "support," "cast your ballot for," "Smith for Congress," "vote against," "defeat," "reject."

As footnote 8 of Justice Stevens' dissenting opinion in Citizens United, explains, "If there was ever any significant uncertainty about what counts as the functionalequivalent of express advocacy, there has been little doubt about what counts as express advocacy since the “magic words” test of Buckley v. Valeo, 424 U. S. 1, 44, n. 52 (1976) (per curiam)."  558 U.S. at ____ (2010), Dissenting Opinion at 11.

Listed below are links to weblogs that reference Footnote of the Day: Express Advocacy's Magic Words: