Footnote of the Day: Co-Ed Sports and VMI

Should there be co-ed football?  Must there be?

Justice Scalia, dissenting in United States v. Virginia (VMI), 515 U.S. 515 (1996), objected to the Court's "sweeping" rejection of single-sex programs and argued that it seems there can not be any possible exceptions to the Court's broad rule.   In footnote 8, he explained:

In this regard, I note that the Court--which I concede is under no obligation to do so--provides no example of a program that would pass muster under its reasoning today: not even, for example, a football or wrestling program. On the Court's theory, any woman ready, willing, and physically able to participate in such a program would, as a constitutional matter, be entitled to do so. 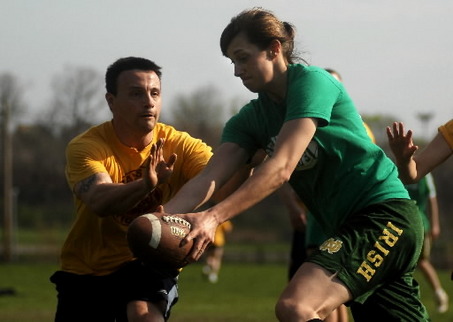 This would be a great class exercise for law schools at public universities with a large proportion of football devotees.  For baseball afficiandos, there will be a footnote later this week.

Listed below are links to weblogs that reference Footnote of the Day: Co-Ed Sports and VMI: