Footnote of the Day: Bush v. Gore in the Sixth Circuit

The United States Supreme Court has refused to intercede in Hunter v. Hamilton County Board of Elections, the Sixth Circuit opinion we discussed here.  In the word's of the Court's Order:

The application to recall and stay the mandate of the United States Court of Appeals for the Sixth Circuit, case Nos. 10-4481, 11-3059, and 11-3060, presented to Justice Kagan and by her referred to the Court is denied.

This not only permits a recount in the Hamilton County election for Juvenile Court Judge, but also leaves intact footnote 24 from the Sixth Circuit's opinion:

It is also discomforting that Ohio’s rule that all provisional ballots cast in the wrong precinct must be excluded may fall—at least in this instance—unevenly on voters depending on where the Board directs them to vote. In single-precinct polling places there is less room for error than at the multiple precinct locations that have caused so much difficulty in this case. As a result, fewer provisional ballots are likely to be counted in multiple-precinct polling places than in those that serve only a single precinct. This disparate impact might not be of constitutional significance everywhere in Ohio, but here Plaintiffs assert that “the polling places where most of the error-infected provisional ballots were cast are in African- American areas of Hamilton Country.” Plaintiffs 2d Br. at 3. It appears, then, that the exclusionary rule in this case may accrue to the detriment of a protected class.

Political Science Professor Charles Stewart III of MIT has a terrific analysis over at Election Law Blog, Reflections on Footnote 24 of the 6th Circuit Hunter Opinion, with a link to his 9 page paper that contains further discussion.  Indeed, anyone looking for information on the Hunter litigation would do well to consult the Election Law Blog page on the case. 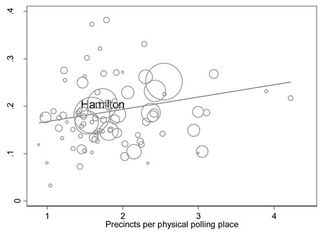 For his part, Stewart argues,

Professor Stewart also "crunches the numbers" and provides some visual representations (see left).  His ultimate conclusion, however, is accessible even to those who might not fully appreciate all the data:

Listed below are links to weblogs that reference Footnote of the Day: Bush v. Gore in the Sixth Circuit: