Footnote of the Day: Brown's Footnote 11

In Brown v. Board of Education, 347 U.S. 483 (1954), the unanimous Court grounded its reasoning for departing from of Plessy v. Ferguson’s “separate but equal” doctrine in its famous (or perhaps notorious) footnote 11, citing “modern authority” demonstrating the social and psychological problems attributable to racial segregation:

FN11. K. B. Clark, Effect of Prejudice and Discrimination on Personality Development (Midcentury White House Conference on Children and Youth, 1950); Witmer and Kotinsky, Personality in the Making (1952), c. VI; Deutscher and Chein, The Psychological Effects of Enforced Segregation: A Survey of Social Science Opinion, 26 J.Psychol. 259 (1948); Chein, What are the Psychological Effects of Segregation Under Conditions of Equal Facilities?, 3 Int. J. Opinion and Attitude Res. 229 (1949); Brameld, Educational Costs, in Discrimination and National Welfare (MacIver, ed., 1949), 44-48; Frazier, The Negro in the United States (1949), 674-681. And see generally Myrdal, An American Dilemma (1944).

The language to which the footnote refers is 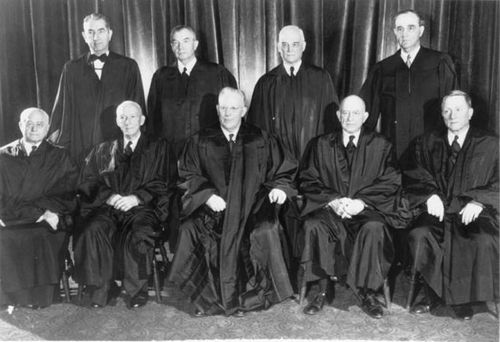 Meanwhile, the organization that developed the litigation strategy of Brown - - - the NAACP - - - is undergoing its own changes with a new generation of leaders who are not exclusively African-American.  Yesterday's NPR story ishere.

Listed below are links to weblogs that reference Footnote of the Day: Brown's Footnote 11: