Footnote of the Day: Bill of Rights Provisions Incorporated Against the States

In need of a handy list (with citations) of the provisions of the Bill of Rights incorporated against the states through the Fourteenth Amendment's Due Process Clause?

The Court's opinion in McDonald v. City of Chicago, decided June 2010, is an obvious place to look and its footnotes do not disappoint.

As support for the proposition "The Court eventually incorporated almost all of the provisions of the Bill of Rights," the opinion includes footnote 12: 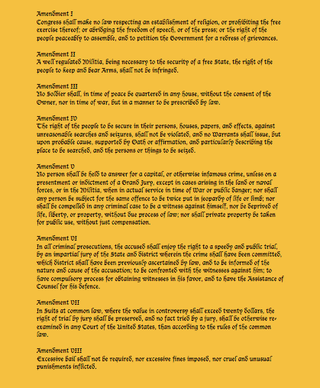 In the next footnote, footnote 13, the Court discusses the provisions that have not been incorporated:

At issue in McDonald, of course, was the Second Amendment's right to "keep and bear arms."

Listed below are links to weblogs that reference Footnote of the Day: Bill of Rights Provisions Incorporated Against the States: