Footnote of the Day: Baseball Poem

In acknowledgement of both baseball season and poem in your pocket day, Justice Harry Blackmun provides a pair of suitable footnotes. 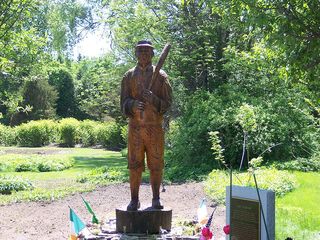 Millions have known and enjoyed baseball. One writer knowledgeable in the field of sports almost assumed that everyone did until, one day, he discovered otherwise:

I knew a cove who'd never heard of Washington and Lee,

Of Caesar and Napoleon from the ancient jamboree,

But, bli'me, there are queerer things than anything like that,

For here's a cove who never heard of ‘Casey at the Bat’!

But they know ‘the air was shattered by the force of Casey's blow’;

They never heard of Shakespeare, nor of Dickens, like as not,

But they know the somber drama from old Mudville's haunted lot.

‘He never heard of Casey! Am I dreaming? Is it true?

Is fame but windblown ashes when the summer day is through?

Does greatness fade so quickly and is grandeur doomed to die

That bloomed in early morning, ere the dusk rides down the sky

‘These are the saddest of possible words,

Trio of bear cubs, and fleeter than birds,

Making a Giant hit into a double-

Words that are weighty with nothing but trouble:

‘Tinker to Evers to Chance.“

The case is Flood v. Kuhn, 407 U.S. 258, 296 (1972), the baseball antitrust case, in which Justice Blackmun quotes the poems in his footnotes to capture America’s fondness for baseball.  Later in the opinion which included more about the history of baseball, Blackmun wrote: ""In view of all this,"  it was appropriate to say that "professional baseball is a business and engaged in interstate commerce," although it is an "exception and an anomaly" and thus exempt from anti-trust laws, even as "football, boxing, basketball, and, presumably, hockey and golf are not so exempt."

There are footnotes for "hockey" and "golf" but they contain case citations, not poems.

[image: statute of Casey at the Bat, via]

Listed below are links to weblogs that reference Footnote of the Day: Baseball Poem :