A separation of powers problem under the Wisconsin state constitution is continuing with a state judge again enjoing implementation of the anti-collective bargaining law and a member of the state executive again disputing the injunction's validity. 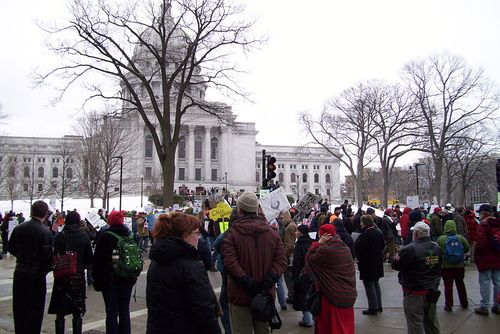 According to reporters Patrick Marley and Bill Glauber in their excellent article in the Milwaukee-Wisconsin Journal Sentinel, after a hearing today Dane County Judge Maryann Sumi announced: "Further implementation of the act is enjoined." The report continues:

Sumi noted her original restraining order issued earlier this month was clear in saying that the state should not proceed with implementing the law. The Walker administration did so after the bill was published Friday by a state agency not included in Sumi's earlier temporary restraining order.

"Apparently that language was either misunderstood or ignored, but what I said was the further implementation of Act 10 was enjoined. That is what I now want to make crystal clear," she said.

But minutes later, outside the court room, Assistant Attorney General Steven Means said the legislation "absolutely" is still in effect.

An appeal of Judge Sumi's original restraining order reached the Fourth District Court of Appeals by way of a motion on behalf of the Secretary of State to withdraw the appeal.  La Follette, the Secretary of State, argued that the appeal was moot because of the publication of the law by the Legislative Reference Bureau on March 25.  In an order today, the appellate panel declined jurisdiction to entertain the motion to wothdraw because it had already certified the matter to the state's Supreme Court, although the Wisconsin Supreme Court has not yet accepted the certitification.

Meanwhile, the GOP request for University of Wisconsin Professor Cronin's emails including words such as "collective bargaining" or "union" which we originally discussed here, has attracted a great deal of attention including a NYT Editorial which Cronin collects here.

Listed below are links to weblogs that reference Wisconsin Collective Bargaining Law Enjoined Again and Other Updates: