Like many who work at a public university, I have been made aware that my email may be subject to a FOIA request.  But I have assumed that such requests would pertain to personnel decisions about colleagues or student matters.  However, it seems that political criticism may also provoke a records request from those being criticized. 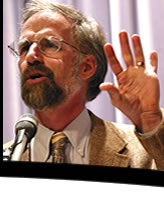 William Cronon, (pictured right), is a history professor at the University of Wisconsin.   On March 15, he started his blog, Scholar as Citizen, discussing the historical and contemporary origins of the Wisconsin legislation prohibiting public employee collective bargaining.  His op-ed published in the NYT on March 21 argues that "Republicans in Wisconsin are seeking to reverse civic traditions that for more than a century have been among the most celebrated achievements not just of their state, but of their own party as well."

On March 17, he received a request from the Republican Party under the "state FOIA":

Under Wisconsin open records law, we are requesting copies of the following items:

We are making this request under Chapter 19.32 of the Wisconsin state statutes, through the Open Records law. Specifically, we would like to cite the following section of Wis. Stat. 19.32 (2) that defines a public record as “anything recorded or preserved that has been created or is being kept by the agency. This includes tapes, films, charts, photographs, computer printouts, etc.”

Thank you for your prompt attention, and please make us aware of any costs in advance of preparation of this request.

The most recent Court opinion regarding a First Amendment challenge to a state FOIA request was the June 2010 decision in Doe v. Reed, in which the Court considered a request under Washington's state open records law to reveal the signatories for a ballot initiative to revoke the same-sex civil union law. In Reed, the Court articulated an "exacting scrutiny" standard, "requiring a ‘substantial relation’ between the disclosure requirement and a ‘sufficiently important’ governmental interest." To withstand this scrutiny, “the strength of the governmental interest must reflect the seriousness of the actual burden on First Amendment rights.”

In Reed, the government interests were "preserving the integrity of the electoral process by combating fraud, detecting invalid signatures, and fostering government transparency and accountability" and that these sufficed to defeat the First Amendment challenge to the disclosure of referendum signatures.

Here, the government has not complied with the request and not yet had an opportunity to articulate what any of its interests might be in disclosing the contents of Professor Cronon's emails that contain words such as collective bargaining, rally, or union.

The controlling case in Wisconsin is:

Even Ann Althouse thinks Cronon will win on this case:
http://althouse.blogspot.com/2011/03/wisconsin-republican-party-uses-open.html

"Universities across the country are asking professors to get more involved in “service learning” and “engaged learning,” which involves professors acting as public figures in the media. Universities trumpet their professors’ engagement in the media in order to recruit more students, win more funding, and market their institutions. The University of Wisconsin at Madison thus proudly announced William Cronon’s op-ed in the New York Times. University of Wisconsin at Madison Chancellor Biddy Martin’s response to the open records request in this case is very disappointing. Universities across the United States should offer a clear and unambiguous defense of professor Cronon’s academic freedom."